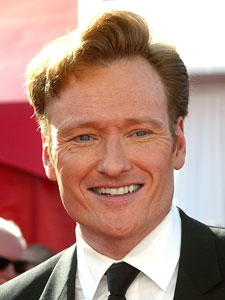 In just a few short days, Conan O'Brien gets his dream job - host of The Tonight Show.  In a great profile in this past Sunday's New York Times magazine, the challenge that Conan is facing is spelled out.  Between Jay Leno's 10 p.m. show, Letterman, and the competition from guys like Stewart, Colbert, and Kimmel for audience loyalty, it's not going to be easy.

The elements that work for Conan in an increasingly crowded environment are his devotion to prep and perfection - and that's what stood out to me while reading the article.  Yes, he's got a bigger staff than any morning show in the country, but it is O'Brien's dogged devotion to getting it right that has already allowed him to thrive in a sea of great talk shows.

Here's a quote from his article that sums up his approach to every show:

"...I did not want to fail.  And now I'm addicted to the feeling of what it's like to do a good show.  There are 35 variables every night - what comedy do we have?  What's the audience like?  Who are the guests?  What time of year is it?  What's my mood?  You need 15 cherries to line up to pay out the jackpot.  And, every now and then, the stars align.  And you keep chasing after that feeling."

What are your show's 35 variables?  Or maybe there are only 11.  What are the factors that contribute to pulling off a great show, and how can you manage (or at times, micro-manage) your staff and other cast members to make memorable radio?

As the article points out, Jay Leno's reputation was sealed when he had on Hugh Grant to comment after the actor's prostitution scandal.  But in today's environment with the myriad news sources, those types of moments are much harder to create because of the huge mass of media outlets.  To really win, it's about prep, booking, treatment, and for radio shows, the local flavor that only you can bring to the table.

But it's more than prep.  The other interesting angle in the article is Conan's willingness to get out and meet affiliates, even as he's preparing a new show with a new set in a new city (L.A.).  And he's not just showing up in America's glamour capitals, but in middle markets that many might find less desirable.  As he commented, "If you want to host The Tonight Show, you need to go to Kansas City and Cleveland and Milwaukee and San Jose and Oklahoma City.  There's something about the show that does belong to those people."

In radio, it's not hard to spot the difference between the startups that "get it," and are willing to put in the requisite time, prep, and strategizing to make it.  And the ones that simply repeat their successes, and expect the audience to come along for the ride.

It's hard not to pull for Conan.