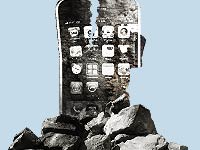 Josh Lovison, who writes for MediaPost magazines - whose emails I read every day - wrote an incredibly incisive analysis of the Apple App Store, and the unknown guy who made it happen.

While you might assume that the success of the iPhone/Touch apps was born at Apple headquarters in Cuppertino, the fact is that a small company of developers, known as Nullriver,created Installer.app, back in '07, a simple interface that allowed just about anyone to create applications for iPhones.  The company's president - Maksim Rogov - a guy none of us has ever heard of- was the force behind creating a way for developers to create apps for Apple's hot device.

A few months after Installer.app's release, the wizards at Apple rethought their policy, and started to allow native apps on iPhones.  One billion apps later, and we all know the story.  And as the iPhone goes, so will go BlackBerry, the Palm Pre, and Google's Android.

So this notion that a very small company could have a mega-impact in the Internet world is very powerful.  And at the same time, the world of iPhone apps and the App Store is essentially the same story.  Apple initially fought the efforts of developers and hackers to penetrate their iPhone.  Today, their efforts are what has broken open the App Store, and with it, the revolutionary world of mobile device applications.

Here's how Josh puts it:

"The App Store isn't just a story of uncontrollable change though. The current state of the App Store is, by all appearances, the first case study in the death of the corporation. In 1939, economist Ronald Coase wrote the essay 'The Nature of the Firm,' which suggests the reason companies exist is to offset transactional costs. Essentially, in 1939, the costs of finding the right person for a job, getting them up to speed, and negotiating a rate, could end up costing more than just hiring a full-time employee. Coase reasoned that the size of a company is determined by the size of the associated transactional costs. Since the birth of the Internet, many of those costs have come crashing down. By providing an SDK (Software Developer Kit) to ease development and a distribution platform that offers massive reach at a minuscule cost, the App Store is the first time corporations and small businesses have been put on equal footing to battle it out. By all appearances, small businesses are winning." 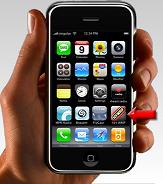 And the incredible thing about this phenomenon is the way that jacAPPS, the company that we've created that develops iPhone apps for radio, Internet audio, and personalities, has been able to enable "the little guy" to have beachfront property on the iPhone desktop.

As Josh so eloquently states, small businesses are winning on iPhones.  As we have discussed in this space, the "umbrella apps" like iheartradio and AOL Radio all have their value, especially for the mega-corporations that have built them.

But for individual radio stations, owned and operated by smaller companies like Greater Media, Lincoln Financial, and Russ Oasis; for Internet-only stations such as KUJO 99; for public radio stations like WTMD and WXPN; and for university stations like WHRB, Harvard Radio, their apps all own prime space on iPhones and iPod Touch devices.

Let's hear it for the little guy.