Don't Be A Twit 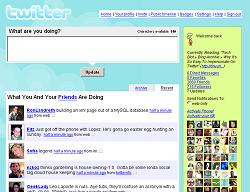 Now that our Tech Poll V is out, and being discussed within the industry... and beyond... it's always interesting for us here at Jacobs to compare our data with what other research companies produce.  Keep in mind - our survey is a web poll, only among Rock-centric listeners in station databases.  You'd think that based on those "givens," that our data would be quite a bit different than what you might find in more standard research surveys.

But it's amazing that when you look at a new Online The Harris Poll, their data on social networking very closely mirrors ours.  They show that three-fourths (74%) of 18-34 year-olds have an account with Facebook or MySpace.  Our survey states that 84% of the younger demographic visit/have a profile on any social networking site.

That means that for all the talk about Shaquille O'Neal, Ashton Kutcher, and every other star, wannabe, Internet guru, and B-lister who is tweeting non-stop, most Americans aren't paying a whole lot of attention.

Is Twitter the swine flu, the news story of the moment, waiting to be replaced by whatever's next?  After all, the news broke recently that a cat (Sockington) now has more than a half million followers.

Make no mistake about it - Twitter is a compelling application, and has some interesting professional and entertainment uses.  But the other side of Twitter is the mundane, pedestrian irrelevance that permeates tweets.  Some of the smartest people are sending out some of the dumbest messages to "followers," debunking the notion that 140 characters or less breeds originality, creativity, and substance.  In fact, it's actually a challenge to get something clever and profound across in less "space."

On the other hand, Twitter has some Facebook qualities that go directly to the ability to be able to quickly and efficiently communicate with lots of people.  And the short messaging is very congruent with the ADD nature we all share.  There's an efficiency and simplicity to Twitter that makes it compelling.  And anecdotally, we are seeing Twitter pop up in focus groups, often among people who are hobbyists or professionals who network with others in their field.

I'll leave the fad question to all you commenters and Twitter fans to debate.  On the one hand, Twitter has a lot of fad-like qualities.  On the other, how many of us questioned whether people would really stick with MySpace five years ago, and today, we know how huge a force these sites have become.

From a radio station or personality standpoint, there are decisions to be made.  Twitter is bubbling under, but becoming a larger part of the conversation.  But the "cume" is on Facebook and MySpace.  Look, you (and your audience) only have so many hours in a day to "connect" with friends, followers, listeners, or consumers.  How are you going to allocate that time?  Are you going to focus on the biggest piece of the pie (MySpace and Facebook users), or are you going to spend valuable time blasting out tweets throughout the day?

I'm not saying that Twitter isn't going to be the next big thing, but there are trends and there are fads.  And the "drop-out" rate for Twitter already is looking scary bad, especially when you consider how "sticky" MySpace and Facebook have become.  As Aaron Goldman, founder of Conceptual, pointed out in a recent post, most people don't go to Twitter.com - they use various applications like TweetDeck, which end up sharing (owning?) the Twitter users.  It's a strange model.  Hey, if Apple buys Twitter as some of the Internet chatter suggests, it's a new game.  Until then...

Our Keith Cunningham has written a great piece on how to use social networking tools, and one of his cautions is directed at jocks, some of whom are spending so much time tweeting during their shows, that they're losing sight of their core audience - people who are actually listening to the station.

A great example of misspent priorities occurred a couple of months back when Milwaukee Bucks star Charlie Villanueva issued this tweet during halftime of a big game against the Celtics: 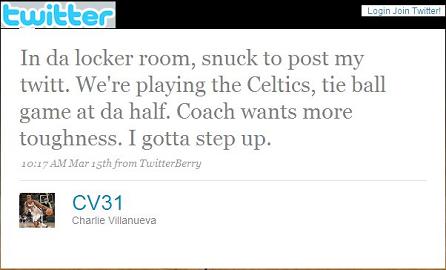 After finding out about this Twitter message, Coach Scott Skiles asked him not to tweet during games in the future.  If Villanueva worked for me, I would have broken his damn phone.

Social network all you like.  Use the new tools.  Connect in a new way with listeners that is easy, friendly, effective, and cheap.  But make the right choices, pick your spots, and don't get caught screwing it up with the folks holding diaries or carrying meters.