One of the big findings from our new Tech Poll is the continued rise in usage of social networking sites.  Now, I can hear your collective "duh," so let me cut to a data point that separates our survey from the others you've read about:

We're seeing Facebook jump ahead of MySpace in overall usage among our rock-based sample. 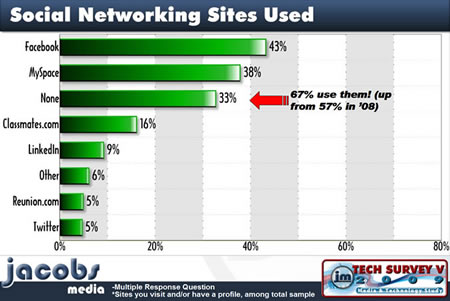 A couple of clarifying points...

First, our Tech Polls (and this is the fifth consecutive survey we've designed and implemented) tend to be a bit ahead of the curve.  Even though they are web polls, conducted among the email databases of rock-oriented stations, they have been extremely telling since 2005, when we launched the first in this series.

That original survey pinpointed the movement from landlines to cell phones - a finding that helped trigger a sea change in the way that Arbitron designs its samples.

So when I tell you that Facebook is now the most visited social networking site among the more than 14,000 respondents who use them, think about the implications.  Which leads me to my second point...

So when you see Facebook make this kind of move, it's a reminder that the big dogs aren't necessarily on top for long, especially in the new media world.

Remember that the first major search engine wasn't Google - it was Yahoo!.

But in the fast-moving world of the Internet and tech brands, it is more than possible for an up-and-comer to dislodge the leader.  Back when we conducted "The Bedroom Project" for Arbitron in '07, we could clearly see the power of social networking, and the potential for Facebook to become a bigger player.  By opening itself up to the larger population (not just students), and then making itself available on mobile devices like the iPhone, Facebook has grown exponentially.  With more than 200 million active users (larger than the population of Brazil), it's even more remarkable when you consider that Facebook has only been around since 2004.

For radio stations, personalities, and other businesses, a smart social networking presence becomes a key component in the overriding strategy.  Our Keith Cunningham has recently sent out a "rules of the road" piece to Jacobs' clients because of the need for stations and jocks to manage their activity on sites like Facebook, and emerging tools like Twitter.

As we continue to see with just about every new technology, it starts with teens, and soon makes its way through the rest of the population.  For radio, that's an especially challenging thought because we've essentially given up on the youth market, and never research teenagers.  This "pragmatic" process of chasing advertising dollars may have made sense back in the '90s, but today, if you're not testing against teens and 18-24 year-olds, you're missing out on the exciting activities that those desirable 25-54s will be doing next year.

Radio has many great inherent assets, but continues to find itself behind the technology curve.  The lack of research in the past 24 months due to economic conditions has made it even more difficult for the industry to get its head around the rapid changes that are occurring.  That's why, despite the challenge of us providing these annual Tech Polls, we are committed to keeping this process going because there's a great deal to be learned.

Our Tech Poll webinar is now available at the Jacobs Media website, and we invite you to sit down, and spend a quiet hour checking it out.  And hopefully, some not-so-quiet hours developing the strategies you'll need in order to continue evolving your station, your company, or your show.  Because when the economy improves, we're all going to need to have our plans in place, and our games ready to go.