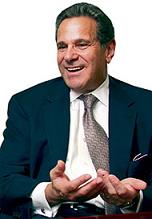 A recent interview in The New York Times with Zurich Financial Services CEO, Jim Schiro, revealed his interesting corporate philosophy that is obviously a work in progress.

Schiro has canceled his company's midyear meeting (where they used to fly in 400 employees), and now provides his "state of the company" messages on YouTube.  They are typically videos taped from his company "road shows," and they have a very natural feel.  Yes, anyone can access them, but Schiro has bought into transparency and these changing times, believing that there's nothing in these videos that should be hidden from public view.

One of the main influencers for Schiro is youth.  In the interview, he talks about how he now regularly recruits very young assistants to be at his side.  While these youthful employees only serve in that role for six months or a year, they provide the type of feedback and perspective that older employees cannot bring to the corporate boardroom.  As Schiro states, "...a smart, bright, energetic young person" offers a viewpoint and knowledge that is more in-synch with where the business world is moving.

I think back to many of the college and even high school classes where I have been asked to make a guest appearance over the years.  Most often, these speeches have been premised as providing students with a look at "the real world" of radio, and the modern media workplace.  All that assumes is that young people don't "get it" when it comes to how business is done.

But that convention has been turned upside-down.  While professionals, like many of you reading this blog, have a genuine perspective about the business, the teens and twentysomethings who we're supposed to "school" have a view that we could benefit from.

How many of radio's CEOs (or for that matter, newspaper and television) could benefit from Schiro's concept of making sure there's a bright, young, up-and-coming professional at their sides?  Instead of hearing the same, tried-and-true opinions, having a youthful, tech-savvy consigliere could bring a different viewpoint to the company.

Nine years ago, I hosted a panel at the NAB called "Your 14 year-old thinks radio sucks."  The concept was that teens have grown disconnected from radio, largely because the industry essentially gave up on appealing to them.  "The Bedroom Project" in '05 underscored radio's antiquated perception of boomboxes in an iPod world.

The surge in CHR formats because of their ability to impact PPM could be a start.  But too often, I continue to be part of cluster strategy conversations where youth formats are rejected because "sales can't sell those demos."  The net effect of the industry turning its collective back on youth has come home to roost.

We are late to this party, and if radio is going to figure out the way forward amidst all this technology and change, it might not be a bad idea to invite a twentysomething to the next board meeting.