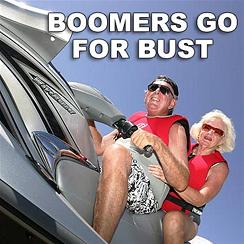 It is truly amazing to watch the old rules and conventions fall during this brutal recession.  But like any bad event, opportunities continue to manifest themselves - if marketers read the tea leaves.

Over the past several years, brands have been obsessed with thinking and appealing younger.  In the process, older consumers were treated like pariahs.  "They don't buy anything anymore" OR "Their brand loyalties are in stone" OR "They are living off Social Security checks and don't have discretionary income."

Well, those old saws are becoming just that in today's changing environment.  As Andy Donchin, director for media investments at Carat in NYC told the New York Times, "50 isn't what it used to be."

Boomers provide stability - both in terms of their finances and their ability to be easily reached by radio.  We have great formats - Classic Rock, Country, Oldies, News/Talk - that speak directly to consumers whose homes are paid off, whose kids are out of the house, and who are becoming increasingly comfortable with new media.  As we've seen in our new Tech Poll, these listeners are catching up - half now own iPods, they are becoming actively involved in social networking sites, and they are using mobile devices for entertainment and information.

A new study - "The Grandparent Economy" - provides data to support some of the new thinking about where dollars will be spent in the next several years.  It shows that first-time grandparents are younger (average age in the low 50's), and with $2 trillion in spending capital in 2009 alone.

As Henry Schlieff, CEO at Hallmark Channels, told the Times, Boomers offer advertisers and marketers an audience "that has assets, not allowances."

As radio continues to identify dollars in search of solutions, the answers are sitting right in the heart of some of our best formats.  Look at your 25-54 rankings all you like, but realize that "old thinking" isn't going to generate new dollars.