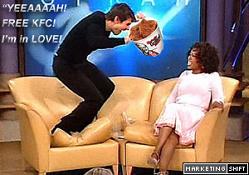 There's been lots of buzz - good and bad - about KFC's attempt to reinvent itself (Kentucky Grilled Chicken) by offering the Western World a coupon for free chicken.  Like the screwed up Dr. Pepper promotion last year (free soda if Guns N' Roses released Chinese Democracy), these offers are often unfulfillable because of their grand scale.

But in the case of Oprah, you've got perhaps the most magnetic media personality on the planet, pushing her legions to download a coupon to get free food.  And as we know from the success of Dr. Phil and the many books that Oprah has backed, when she gets behind something, it works.

How many radio stations have their own version of Oprah, providing entertainment, laughs, and community service every morning on the air between 6 and 10?  Why couldn't a local radio station with lots of cume trust and audience loyalty do precisely the same thing in a local market?  If Oprah can do it nationally, surely your big-name morning show could pull it off locally.

And what would be the result? 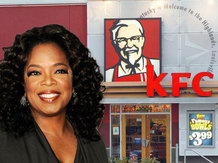 In KFC's case, one takeaway is that the product has gotten healthier, and only the Oprah endorsement could even begin to make that happen after all those years of producing greasy fried food.  And people are talking about KFC, another bigger than life effect.

In the case of your morning show, you have the power to fill a local restaurant, create a line outside a car dealership, or anything else - provided it's a great coupon deal that contains a solid offer.

And in the process, you not only do something powerful for an important local advertiser, but you demonstrate the power of radio.  Because while Oprah has clearly helped KFC in this process, the other effect is that she has once again underscored her own power and influence.  Whether it's supporting a book or Barack Obama, the world knows that when Oprah gives a product her seal of approval, it has impact.

On the local level, perhaps one of your personalities wields a similar ability to move bodies, create perceptions, and bring attention to a business that needs more than what they'll derive from just running a schedule.  Many stations are now technically "sold out" for the next several weeks, but at rates that would have been low in 1985.  We have allowed our business to become commoditized, and in the process, devalued in the eyes of advertisers.

At a time when too many people, inside and outside of media, are questioning radio's potency, this would be an excellent demonstration of why a great local station is a better advertising vehicle than Twitter or Pandora.

If Oprah can do it nationally....