If you think back throughout your years in radio, it has probably dawned on you that while newspapers were out there selling their big box circulation numbers, radio was hung up on selling with the smallest numbers possible.  So while the Daily Planet in your market was touting their reach of 750,000 daily readers, your reps were running around bragging about their 1.7 average rating in middays.

It just never made much sense.  And thanks to the cume steroid that is PPM, a radio station's reach in many markets can move into the multi-million territory.

(OK, don't throw darts at me for bringing up reach in this blog - that's not my point.)

The bottom line is thinking big - especially when it comes to the advertising side of the equation.  That's why when our Eric Holmes showed me the way that Pandora is integrating advertising into their streaming player, it really got my attention. 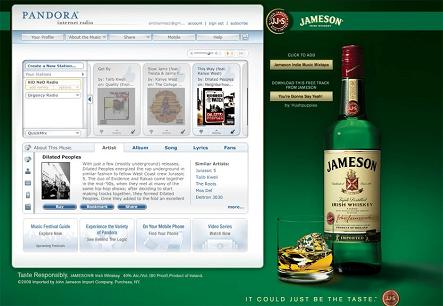 This isn't just a subtle ad, but something that truly jumps out at you.  Now look at most broadcast radio streaming players, and you'll see the contrast.  Once again, we go out of our way to keep it small, despite the difficulty of monetizing our digital delivery.

It's not like our websites have an inventory problem.  Unlike our airwaves, where there's a limited number of spots that can be run, we have unlimited commercial real estate on our sites. We have to do a more creative and effective job of integrating advertisers and getting results.

If we're going to get serious about making money with our web traffic and digital products, it's time to start thinking BIG.