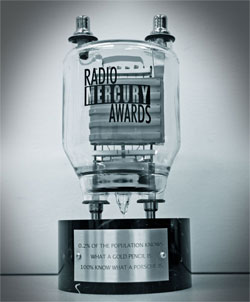 A couple of weeks back, a blog post (Afterthought) highlighted an RAB roundtable about the sorry state of radio production.  Now it turns out that the RAB will not be handing out a Mercury Award for the Radio Station Produced category.  Why?  Because none of the entries was worthy, according to the judges.

The story, covered by RBR, featured an angry response from Patrick Cleary, President of Lost Coast Communications.  Noting that radio stations simply don't have the budgets and resources in which to fairly compete against deep pocketed agencies, and that the RAB is not displaying leadership in this area, Cleary has canceled his membership.

While it is easy to understand his outrage, Cleary may be missing the real point of this RAB move, because it acknowledges what we said in our original blog, and raises questions about whether radio is going to solve its commercial production problems.

While the RAB says that it will be announcing new initiatives designed to foster better commercial production, it has missed an opportunity to make a statement about how radio is simply mailing it in.  In its release about the Mercury Awards, the RAB ducked its decision to drop prizes for radio production, focusing instead on the categories where awards will be announced.  This could have been a great forum for the RAB to stand up and make the statement that everyone in radio knows is true:  We simply aren't doing a good enough job on the commercial production side because radio has stopped investing in this all-important area.

The agencies get it, and it is one of the key reasons why they have come to disrespect radio.  We may talk about radio's fantastic reach and its ability to sell product and influence buying decisions.  It's all true, and despite the competition from so many different sources, radio can still effectively sell tickets, cars, and any other consumer product.  But the sorry state of our commercials has led to tune-out from listeners, and frustration from agencies.

And it's not a talent issue.  There are great production directors at clusters all around the country, but they simply have too much on their plates to be effective.

And no one is raising the bar in sales and department head meetings, demanding more creative and impactful commercials.  There's a point where "burning the furniture," as Les Moonves stated a couple of years back, truly hurts the quality of a media outlet and its advertising potency.

By not even bothering to issue awards for radio produced commercials, the RAB has admitted that.  But to truly make a statement that would attract the attention of ears in the board rooms, the RAB should have stepped up to the mic and expressed it with honesty and clarity.  And then, earn its membership fees by doing something meaningful about it.