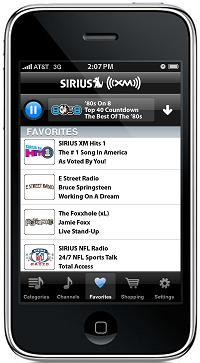 Some big news out of the satellite radio camp this week.

First, in the middle of the recession and at a time when subscribership is on a downward trajectory, Sirius XM is raising prices to accommodate music royalties.  At the end of July, the monthly fee gets jacked up $1.98 to pay for the performance royalty tax.  At a time when our Tech Poll shows that satisfaction with Sirius XM is going down, and the propensity to continue subscribing is also headed south, passing along this burden to consumers cannot be perceived as a positive.

Then there's their new iPhone app.  Finally, after months of development, Sirius XM channels can be accessed on iPhones.  This comes at a particularly propitious time as the new $99 iPhone hits the market.  Along with the new 3G S, how many more millions if iPhones will be in circulation throughout the rest of 2009?

But, of course, it's not that simple.  If you're a Sirius XM Premium Online customer, the app is free.  But to upgrade to that status, it's an additional $2.99 on top of what these subscribers are already paying for satellite radio.

With me, so far?  But that's not all because even after absorbing the additional $3, the app still doesn't deliver what you really want from Sirius XM on your iPhone - MLB and NFL play--by-play, NASCAR, and some guy named Howard Stern.  You can already read the "reviews" on iTunes from many less-than-thrilled subscribers.

So, the good news is that Sirius XM finally got its brand and a lot of its content on a different (hotter, cooler, etc.) platform.  The bad news is that it will cost subscribers even more than they're already paying in a business proposition that has become steadily shakier.  And for all that, the King of All Media apparently doesn't include the iPhone in his slogan.