A recent article in USA Today about iPhones took an interesting sidetrack about device usage.  Nielsen research guru, Roger Entner, put together a mind-blowing analysis that clearly showed how totally active iPhone users really are – compared with owners of other mobile phones, wireless laptop computers, and even Blackberries.

When looking at the monthly megabyte usage, iPhone owners are sucking up twice the bandwidth as wireless laptops – an amazing 400 megabytes a month.

That’s incredible engagement, and it speaks to the powerful hold these devices create.  (My wife will tell you how much fun it is to have dinner with me, iPhone in tow.)

And now that the $99 iPhone is upon us, you have to believe that Apple is going to dominate the mobile device space in the same way they have personal mp3 players.

As it turns out, Enter writes a blog for Nielsen, and recently wrote about Apple’s big move.  Here are some salient quotes to consider (the bolding is mine):

…According to Nielsen’s Mobile Insights survey, which asks 25,000 Americans every month about their wireless attitudes and behaviors, the second most important factor-noted by 20% of respondents-as to why people did not pick the iPhone was its price.

What has been largely overlooked is the impact of the iPhone 3G price cut on the industry as a whole.  It is hard to overestimate the impact that a $99 iPhone has on the wireless carriers and handset manufacturers in the U.S.  The new $99 price point for the iPhone 3G completely changes the value proposition of every handset at every carrier in the U.S.

Some observers have commented that the $99 price point “kneecaps the Palm Pre,” but the kneecapping does not stop there.  The dozen or more Google Android handsets that are being launched in the second half of the year will have prices that either make them look non-competitive or extremely margin-challenged…

…The implied point of view and resulting strategy is that voice has been commoditized and has become table stakes.  Defendable differentiation will come from devices and data…

So that brings me to the second topic of this blog – what type of content should broadcasters include in their iPhone apps?

Many of you know Jerry del Colliano, the former editor and publisher of Inside Radio, and now the independent gadfly and all-round observer of the industry.  Now that Jerry is no longer tethered to a real company, having to serve clients, his rhetoric and criticism has gotten stronger and more pointed.  You may not always agree with his views, but he is out there telling lots of truth and slugging away every day in his well-read Inside Music Media Blog.  Jerry has spent lots of time in recent years teaching at USC, and obviously absorbing lots of “data” from young people, much in the same way we benefited from “The Bedroom Project” experience.

I don’t always agree with his POV, but it’s always provocative and interesting reading.  I’ve noted that he’s been disparaging of broadcasters’ streaming activities, and using iPhones for streaming purposes, and I’d like to use some space here to start a discussion.

Here’s a quote from a recent Inside Music Media blog:

Media execs love duplicating the same content that they air for free on the Internet.  Why?  Because they think they can make a fortune selling different cheap commercials on the stream.

But there has been precious little evidence that streaming is even wanted by their audiences.

Yes, if you're in a building and want to listen to a terrestrial format, of course, it comes in clearer online.  But even with all that factored in, terrestrial radio listening delivers not quite 3% more listeners to the station's format. By any standards that is a screw up.

Two thoughts here.  First, these are good questions.  But our Tech Polls consistently show considerable interest in streaming – and its value.  Consider how weekly streaming overall has increased over the past five years of polling: 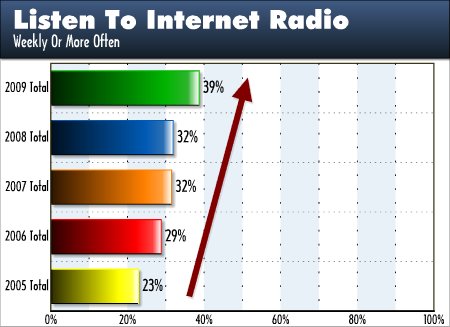 And what are radio listeners tuning into?  Mostly local stations – not that Ska station from the Bahamas, or that cool Triple A in Taos. 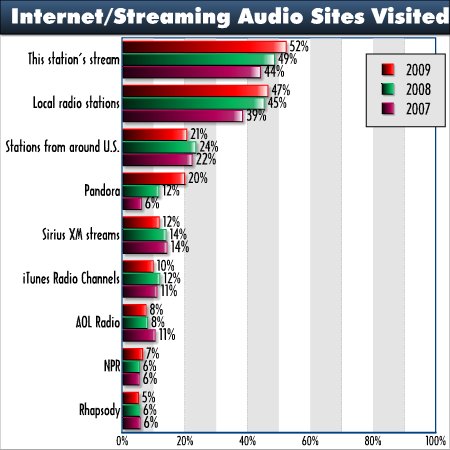 In fact, the trend is improving for local station streams.

But Jerry questions low streaming numbers, and in that regard, you have to wonder why stations are even bothering looking at PPM numbers for their streaming stats.  Their own web analytics are more powerful – and easier to sell.

For me, the streaming thing is a no-brainer.  We have been tethered to transmitters and towers, while the digital world has mushroomed.  Streaming gives us a digital foothold, right alongside podcasting.  In an era where radio has totally lost its portability (good-bye Walkman), the iPhone allows broadcasters to have a branded presence on the coolest device going – and it provides the ultimate portability, as well as connectivity in vehicles.  If we don’t take advantage of new platforms, we truly will go the way of the horse and buggy.

But then Jerry says this:

So, there appears to be an endless stream of major screw ups that radio and record industry CEOs have made -- enough to inspire a developer to design their own Apple iPhone app.

Unfortunately, just like other radio apps, it would be downloaded by millions but I am afraid few people would listen.

So, of course, this one hits home, as we’re nearing completion of our 100th iPhone app.  Look, we work closely with stations to try to ensure the apps we design for them aren’t just “streamers,” but also offer other strategic benefits: iTunes tagging/purchase, sponsorship/promotional panels, podcast downloads, texting, and connections back to the station’s site.  We’ve read Meatball Sundae, too, and realize that just having an app at the App Store isn’t enough to create a meaningful digital presence, or to engage a listener.

But we also grasp the reality that these iPhone apps for radio brands bring a certain cache to a medium that is highly needed at this time.  At a time when radio can’t buy a PR break, the ability to play in the iPhone area is a major step up.  While he may never include an FM chip in iPhones, Steve Jobs has enabled broadcast radio to have a seat at his table.  If we don’t sit our asses down, we’re going to blow another golden opportunity to evolve… and survive.

Sorry, Fred, but with daily contact with Gen Y, Jerry knows exactly what he is talking about. Why would anyone outside the radio industry stream radio stations, when they have acess to "personalized" music services, such as Slacker, Pandora, and Last.fm? Radio is non-interactive, which is a killer. BTW, how's that HD Radio thing going - haven't heard much from you, or Paragon Media Strategies, lately? Pandora, Slacker, and Last.fm have crushed any chances for HD Radio.

Add Stitcher to the mix too. On-Demand content from Talk Radio, podcasts and more. It is Pandora's talking cousin.
Take the best in programming and personalize your own station.
Buh-bye stations, satellite and syncing and Hello to on-the-go, on-demand information/entertainment.