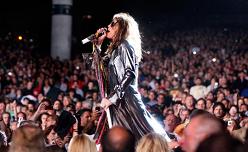 Album Oriented Rock - a phrase that no one uses anymore, but it once described the most popular rock format of the '70s and '80s.

AOR lost its mojo for a variety of reasons - the fragmentation of the format by Classic Rock was one culprit.  But the other main driver was that these stations stopped playing anything except hit singles from albums.  Back in the day, AOR meant album playbacks.  It meant adding 2, 3, or 4 new songs from a shrink-wrapped album to see which ones would garner the best audience response.

Callout and auditorium tests kept playlists tight, but perhaps the biggest culprit was the birth of the mp3 file, and a greater sense that record companies and even artists were ripping off consumers by marketing albums that only contained one or two really great songs.  While there remains album works of art - "Dark Side of the Moon," "Abbey Road," or "Who's Next" - many 21st century consumers are more comfortable buying their music one song at a time, without all the "filler."

While there may have been some subjective truth to that, the exodus away from albums and toward individual songs signified an inevitable loss - for both music buyers and the recording artists who work at their craft.

But in an event that is as counter-intuitive as the comeback of vinyl as a medium, more and more concert tours are now about album performance.  Aerosmith has been playing Toys In The Attic in its entirety, and Van Morrison (Astral Weeks) and Steely Dan are moving along the same path.  In Steely Dan's case, the plan is to play different albums (Aja, Royal Scam, Gaucho) on different nights of the tour.

As Steely Dan's Walter Becker notes, "In the current climate of financial desperation, we figured there's no reason why people who are going out and buying tickets to concerts shouldn't get a little extra."

And in that spirit, this is clearly a repudiation of the singles mentality that tight-listed radio wrought, and later made official with the 99-cent download.  For bands, this is about serving P1s.  At this point, anyone paying more than $100 for a concert deserves to see something a little special.