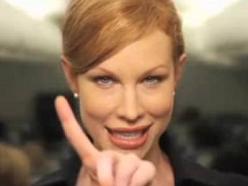 What do you do if you’re broadcasting a quality product that while valuable to consumers, is so boring, repetitive, and basically wallpaper that most people have essentially tuned it out?

Before you get paranoid that I’m talking about your station, my example is actually those safety videos the airlines are all required to run while taxiing to the runway.  I’m on airplanes pretty much every week, and even after the U.S. Airways incident where the plane miraculously landed in the Hudson River, I don’t usually pay a whole lot of attention to the airlines’ attempts to make sure I know the location of all the exits and how to work their “flotation devices.”

Delta has spiced up their safety video with a very attractive model known as “Deltalina” who even wags a finger as she’s reminding you not to light up while on the plane.  I fly these guys a lot since they acquired Northwest, and I can tell you that most people are paying a lot more attention to their safety video now.

And Air New Zealand has taken this concept to the next level.  They’ve created a little video called the “Bare Essentials of Safety.”  Utilizing body-painted – and naked – flight attendants and a pilot – and some very careful camera angles, their video is also pretty riveting.  It’s part of a larger campaign where even CEO Rob Fyfe is in the nude to hype the fact that “At Air New Zealand, our fares have nothing to hide.

Now only have passengers put down their magazines and Blackberries to watch what used to be a mundane safety video, but “Bare Essentials of Safety” has generated millions of downloads on sites like YouTube, adding viral interest to an otherwise boring piece of production.  Deltalina has also become a YouTube star.

So, back to radio, and there’s an important lesson here.  Many stations produce a pretty good sounding, consistent product.  But because they sound essentially the same as they have for many years, consumers may be systematically tuning radio out.  It’s one thing to be good, but another to have a dash of unexpectedness and unpredictability to keep consumers on their toes.

Recently, we were working for a heritage station that is going through a challenging cycle.  As one of the members of the team pointed out, we can successfully “fix” all the elements that need attention, and in the process, greatly improve the sound of the station.

And no one may notice.

That’s because the call letters and the brand have been so staid, the airstaff has been the same, the voice guy has been there for years, and the overall style of the station has remained essentially unchanged.

Given the cacophony of media and entertainment outlets competing for the attention of what were once “our listeners,” radio needs to do more than simply present solid, competent products.  We need to shake the tree, do the unexpected from time to time, and be willing to take some risks on and off the air in order to cut through.

As Seth Godin reminded in Purple Cow, being good will kill you.  Being “purple” is the only way to remain viable.

Realizing there are risks to being edgy, chance-taking has to be thought out before diving in.  Yet, the station that relies on consistency in order to win is taking a risk by being predictable.  In this environment, we cannot afford to be ignored.

Many stations and personalities are still experiencing a form of creative post traumatic stress disorder from Janet Jackson’s “Nipplegate.”  In the process, they’ve forgotten about the importance of creating attention and being compelling.  The TV networks get it, even with the names of their shows.  This fall, it’s “Dance Your A## Off” from Oxygen.  How else can yet another reality TV dance show get your attention?

Even if we were marketing like in the “good old days,” the old “Favorites of the ‘70s, ‘80s, and Today” TV spots with accompanying video clips wouldn’t penetrate the audience’s collective ADD.

While still satisfying the demands of PPM, radio has to take the longer view, and think about how its stations, shows, contests, and promotions can blast through the myriad competitors, the hype, and even the news in order to not be left behind by new media.

It will take a lot more than music testing and 9th caller contests to get their attention now.