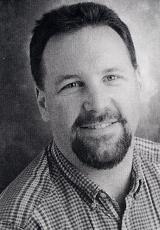 iBiquity is doing something right.  Realizing that part of the HD Radio solution is to get inexpensive, cool-looking hardware into the hands of consumers is a key factor.  Now the Insignia portable at $50 is on the market, available at Best Buy, and it's a chance to flood the market with inexpensive, portable radios.  There are lots of nice features on this Insignia unit, so to provide a little insight on the buying experience, our intrepid reporter, the Conclave's Jay Philpott made the trek to a St. Louis Best Buy.  Here's his report:

Upon reading in this morning's trade press that the first portable HD radio (the Insignia NS-HD01) was available as of today, I resolved to get one.  By early evening, I had a chance to get to my local Best Buy, and before walking in, reflected on the tales I've heard over the past few years about how uninformed the sales people at the "big box" stores were when it came to HD radio.  I braced myself for the worst, but it wasn't the central problem I experienced.

I was happy to learn they had received 5 units, and according to the sales person, only three remained.  The question was: Where was the radio?  Although it was assigned to the "home theater" department, it wasn't stocked there... it wasn't in car audio or computers either.

At one point I had three sales associates surfing the store computer, calling out SKU numbers and canvassing the store.  I was happy to hear that they were a bit more informed as to what the product was even if they still referred to it being a device that was "like satellite."  At least they knew it was an adjunct to FM.  Finally, the stock of radios was located in the section with mp3 players... and that makes sense, although there was no prominence in the display to alert anyone to the presence of this new product. 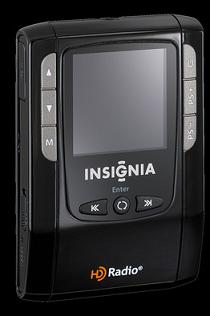 The Insignia is a pretty cool-looking radio, unlike some of the designs of its tabletop predecessors.  It's about half the size of an iPhone, has a nice LCD interface and pretty intuitive controls... it does not have an onboard speaker - so the only way to listen is with earbuds or headphones.

Still, it's a nice device.  But, there is work to be done to insure that consumers won't have to endure the process I went through.  I'm not so sure that the moderately interested buyer would wait the 40 minutes I did just to get this new radio, even at the very reasonable price of $50.  And the manufacturer needs to be a bit more aggressive with the store to get shelf space and signage.

As an industry, we should support this effort with better promos than those offered by the Alliance.  They seem to be shooting more for creative writing awards than selling actual radios.  None of the ad campaigns has really done much to entice a consumer to the medium of HD Radio by extolling the virtues of the unique programming. 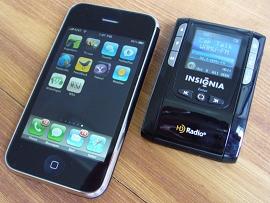 And as individuals in the industry, I submit we all commit to this exercise:  Pick a Best Buy in your market and go there as a normal shopper.  Inquire about this product.  See what product knowledge the sales associates possess.  If they seem to struggle with the product description, how it works, etc... help them through it.

Let the teaching and learning (and buying) begin!  An appropriate spirit since the Conclave begins this week!

Glad to hear your shopping experience was better but not surprised they had trouble locating them -- they have only been in the stores for a few days. The good news is many Best Buys are already sold out as demand has been greater than expected. That is good news for them and for us! As for the HD Radio Alliance commercials, you might want to actually LISTEN to what is running on the air for this product. http://www.hdradioalliance.com/commercials.php Since these were written and produced by Best Buy and Radio Shack (who seem to understand their consumers pretty well, I assume you're not being critical of them. :)

Peter, thanks for chiming in. And you're right - I had NOT heard the Best Buy spots. Much better effort, simple, clear, and hammering price points and benefits. A marked improvement over that "Pirate" series that was all creativity, and no beef.

Most of the HD Radio formats are automated dreck, as evidenced by the failures of Format Lab and iChannel HD Radio Network. You consider this to be an inexpensive portable? Try the excellent $10 Sony ICFS10-MK2 that will run on 2AA batteries for 200 hours. Heck, I have a Kaito WRX-911 AM/FM/SW radio that was only $20. But, the AM sections on these radios are now worthless because of IBLOCK's jamming, and soon to be worthless FM sections after the FM-HD power increase. Now, instead of listening to AM, I spend my time on SW, as many listens are probably being forced away from radio because of IBLOCK - I certainly hope so!

That's good news that Best Buy is doing nothing to prmote the Insignia. I suspect, there will be a flurry of buying from those in the radio business, giving the false impression of consumer interest, that like the rest of the HD radios, it will fade into obsolescence. I do have to give kudos to Bob for pulling off this portable. BTW - I thought that after the HD Radio Questionnaire fiasco, that you got the boot from the HD Radio camp? Who buys radios, anymore, except for us radio-geeks?

I'm not sold on HDRadio yet. I have three radios: Radiosophy (Radio is GREAT), and two JVC in dash models. In San Diego, reception outside of the metro area is terrible. Consumers will wonder what is wrong with the radio if listening to a HD2 station and the radio reverts back to analog signal when the reception is bad. There's no real programming hook here, outside of three stations. What is the return on investment for the radio station? LA has done some interesting programming by having their news stations on HD multicast (KFWB, KNX, and KABC). Add in "HDRadio, oh you have to pay for that service" at Best Buy and Fry's .... the message is not getting through to the sales folks nor the consumer. The audience is not listening.

It is interesting that this portable has no external speaker, or tagging support, or anything else. This must be a move to save power. Who would ever buy a pocket-radio without an external speaker? Also, I believe that the earbuds are being used as part of their diversity antenna system. Make sure to keep the earbuds extended horizontally, at full-length - LOL!

Oh, it also has no AM section. Issues of power and interfernce, being that it runs a DSP? Well, this should please all of those AM-HD broadcasters, as this is surely a sign from iBiquity that they have pretty-much abandoned AM-HD.

Looks like a great radio too bad it doesn't include AM.

Now the IBOC radio stations just have to get FCC approval to increase the power of their digital signal so that you can actually receive a signal.

I think that once the power is increased to around 10 percent of a station's analog signal, many of the problems with reception will be solved. Right now I live 40 miles from almost all the HD towers in my market, and the signal cannot be received reliably even in store displays until roughly 20 miles from those towers, however, I can get good analog signals at city-grade levels to almost 60 miles out.

Stations that run translators in my market and boosters, have not made the switch yet, in the case of translators, they have not put HD transmitters on those yet, probably because of the power problems.

On the product at hand, one reviewer at Best Buy's page for the item on their website said you had to have line of sight to the transmitter to get the signal, kind of like working with satellite radio, which may explain the store person comparing it to datellite radio. Strangely, the reviewer said that reception for listening in-home was better. I don't quite understand his reasoning, but there's got to be something to explain it in his particular case.

The reason the Best Buys sold out is that most of them just carried a handful (5) HD portables. Of course, from what I have read at Radio-Info, AVS, and radiolists, is that there was a run on these by those in the broadcast industy, trying them out. Do you really think that the General Public cares, or even has a clue that these portables exist? Let's have some honesty here, Peter, for once.

There is plenty of opposition to any FM-HD power boost, and certainly up to -10db. In many cases, broadcasters do not have the headroom, or the funds for complete transmitter rebuilds. At 1%, FM-HD is causing adjacent-channel interference, so a -10db boost will trash analog FM. With far less than a million IBOC receivers in the marketplace, there are 800,000,000 analog receivers. In Wash, D.C. some AM-HD and FM-HD stations have shut down. In Tuscon, Citadel has shutoff some FM-HD stations, and you can bet this is happening elsewhere. iBiquity's system is junk-science, and broadcasters know it. So, good luck with that FM-HD power increase. We need some sort of investigation into iBiquity, and their relationship with the FCC.