As if Pandora hasn't caught enough of a break by getting its music royalty fee situation together, founder Tim Westergren (or just plain, folksy "Tim" in his recent email to customers) is going after broadcast radio in a blatant, sleazy, and not-so-nice way.

In an email to Pandora customers, "Tim" asks them to contact members of Congress to push for passage of the Performance Rights Act so that companies like his have "a level playing field" with broadcast radio. 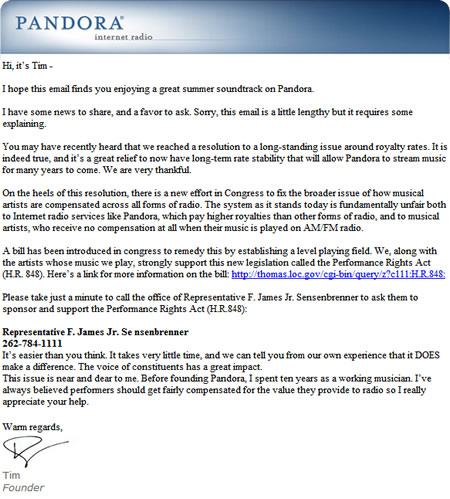 First, Westergren is conducting an end run, using his own customers to attack his apparent #1 enemy, broadcast radio.  "Pandora Radio," as it is referred to all over its site and around the Internet, is making a not-so-transparent effort to upset broadcast radio's long-time dominance of music discovery and presentation.

Second, now that he has his deal in hand, he feels he can put the pressure on broadcast radio, even though Pandora wasn't far away from extinction because of the artists he is now trying to protect.

Third, for a company that prides itself on its unique, honest relationship with its customer base, this email campaign reeks of being underhanded, while not clearly explaining how Pandora would benefit if broadcast radio took another one on the chin.

Westergren deserves a lot of credit for his creation.  As a supporter of music, Pandora often does a much better job than many music radio stations because he embraces artists and their music, while being in better touch with his customers.  Radio could help itself by observing how Pandora serves its audience by being music-centric and engaged with what they want from "radio."

But this Pandora campaign to further destabilize radio (Hey, we're doing a pretty good job without his help) also misses an important point about the calculation of value to the recording industry, its musicians, and its brands.

Broadcast radio does more than play and identify music, and provide a convenient store where you can buy songs.  Over the decades, broadcast radio has conducted millions of artist interviews, sold millions of concert tickets, has promoted new albums and singles for no direct compensation, and has built the thousands of artist brands that has contributed to creating an entire industry.  Broadcast radio doesn't just sell songs for 99-cents.  It sells albums, CDs, boxed sets, digital repackagings, and just about everything else the music industry has released to the public.

I want to meet the guy who was the first to stand up in that big conference room, and make this suggestion: "Our sales are in the tank.  Kids are stealing our music.  We're getting bombarded by new competition.  This Steve Jobs guy will kill our industry with his 99 cent downloads.  I know - let's go on the attack against radio!"

The assault on broadcast radio by the recording industry has always been short-sighted, despicable, and just plain stupid.  Westergren has made his reputation by being "about the music," and in the process has created a web service that has milllions of adoring fans.  It's too bad he's chosen to go down this road.

Tim's email is even more disingenuous that it appears - although less radio focused than Fred suggests.

First, the new resolution regarding royalty rates will not allow Pandora to stream music for "years to come". Pandora (or any other webcaster with more than $1.25 mil in revenue) cannot make a profit under the new rates and they know it.

The current rates will not only kill any possible profit for webcasters, if they were universal to all ""radio" it would kill all "radio" because everyone would lose money.

So royalty parity would surely settle in at lower levels than currently exist for webcasters - meaning Pandora's rates would drop - and if Pandora's rates don't drop, they won't survive. My guess is that is the agenda behind Tim's e-mail - more than any death wish for terrestrial radio - although a performance royalty might carry the consequence.

Good for Tim! Personalized music services are the future of "radio". There is a huge difference between creating one's own personalized playlists with music discovery, versus being subject to canned playlists on broadcast radio. Plotting hdradio.com, iheartmusic.com versus pandora.com reveals the new music explosion:

Greg, you're a moron. While it may or may not be the future of radio to have personalized music services, you're still missing the point. Do yourself and the rest of us a favor - stop throwing a tantrum about radio and let the rest of us adults talk about adult subjects.

The kiddies table is calling you Greg...