The Healing Power Of Michael

Here's a quote from Magic Johnson:  "Michael Jackson made me a better point guard."

What?  It is truly incredible how death can instantly change one's image.  Have you ever seen so many people come out of the woodwork, "deeply affected" by Jackson's passing?

This recent "research" from the website, GraphJam, says a lot about posthumous mood swings and changing attitudes: 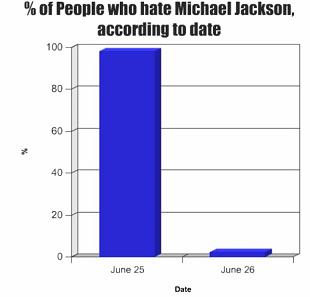 Let's put the Michael Jackson story in perspective.  Yes, for the cable news networks, this thing could generate O.J. Simpson-like ratings.  And with medical and autopsy results, child custody fights, and other family squabbles yet to come, this story will be the gift that keeps on giving.  The PPM data in a couple of weeks will no doubt be telling.

But at what point can media outlets not benefit from the Jackson hype?  What is the trade-off for tapping into the most mass appeal story of the year versus going against the grain of the audience's DNA?   Case in point: WNRQ in Nashville, a Classic Rock station that has been quite successful over the years.  Here's an email they sent out to their database (mostly P1s, of course) on Tuesday morning. 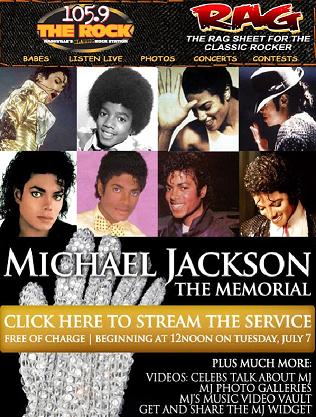 And Michael Jackson video coverage of the service was featured on their website the next day (along with many other Clear Channel station sites we checked).

When does mass appeal news coverage overstep its boundaries and do damage to the brand?  Would a Country station or an AC outlet do the same if (gulp) a Robert Plant bought the farm?

Maybe this is one of those Clear Channel "cram downs," rather than a local decision.  And while no disrespect to the PD at WNRQ, how does the audience react to something like this?  It's a good question, and one that should spur varied opinions on both sides of the Michal Jackson line.

While some would argue that this is one of those bigger-than-life events that demands coverage and attention, others (me) would respond that you can't have it all.  There is the Law of Sacrifice, and while Rock morning shows need to deal with the Jackson death/service/hype/insanity in their own stylized way, does this type of adulation coverage exceed the "rock speed limit?"

Your comments, as always, are welcome.

In another note this week, the radio industry was saddened by the loss of one of its own superstars, Emmis/Indianapolis' Tom Severino, who was highly regarded both in life and in death.  Tom was one of the good guys - a down-to-earth broadcaster who truly loved this business, and was in the process of leading his cluster through the digital morass.  Tom was also an alumnus of WRIF in Detroit, a station that has "graduated" many fine radio professionals over the years.  Our sympathies and condolences to Tom's family, and our friends at Emmis.  We just lost one of the best.

You need to have an open mind with content on your website. The more content, the better the website - "build it and they will cume." MJ music and his "funeral party" is not for on air or formats that do not apply but certainly it's great for any website.

It would seem to most normal people that an intelligent programmer would want to report the major news when it is important across the spectrum regardless of music genre.

FYI: Robert Plant is not in the same league with this guy as an entertainer, and would not warrant the coverage, plus you should already know that based on the Q factor. It seems to me you are beating your drum to fill up space which is really sad about this blogging stuff as sometimes it would be best for people to put their brain in gear before spouting nonsense. The PD at the station did his job period, contrary to many stations who missed the news period.

Fred…some thoughts on today’s blog…a classic rock station sending out an email on MJ’s funeral is a blunder…a rock station (classic, active, whatever the label) is about what it IS and what it ISN’T…people come to ROCK stations to NOT HEAR pop crap you get on other stations…rock stations should be refuge from the saturation of this event…Law of Sacrifice? YES in this case…playing “Beat It” when it was a current was probably a good move in the early 80s when Thriller was at its peak…(not many played it as a recurrent if I recall accurately) but an email dedicated to Michael Jackson passing is just another dumb CC move.

Classic Rockers don't live in a bubble. It's a conceit of many radio programmers to pigeonhole audiences into simple categories. I would hazard to guess that many Skynard fans such as myself also enjoy watching photos of Lindsay Lohan pole dancing and Bruno putting his ass in Eminem's face. A successful radio website is a pop culture hub. It is not a stretch to believe that many classic rock radio listeners were interested in seeing the MJ funeral because it was a massive cultural event. If WNRQ was able to have their audience watch on their site rather than jump to CNN, or another stations' website, then the PD made the right call. Getting your audience to your website and keeping them there is becoming a large measurement of a station's success. I don't think the station was playing any MJ music or forcing Thriller down anyone's throat, but giving the audience the option of viewing the funeral was a good way to keep it from wandering elsewhere.