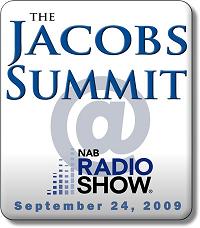 If you've ever attended one of our Summits - first with Gavin, then a long run with R&R, and in recent years, being co-located at the N.A.B. - you know that our focus has always been on presenting sessions that are in-tune with the issues of the day facing radio.  (Selfishly, we have always booked the Summit with the idea that if we at Jacobs can benefit from the content, then there's a good chance you will, too.)

The Summit started out as a get-together for Alternative programmers, and has evolved into an all-industry afternoon of compelling, relevant sessions.  In past years, we've featured celebrities like Harry Shearer, Little Steven, and Nikki Sixx, and we've taken on issues and topics ranging from indecency to listener-generated content to the threat of satellite radio.  Last year's "Presidents of Radio" session was groundbreaking, entertaining, and memorable. 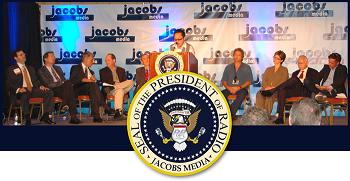 We've gone from a gathering that was once mostly populated by PDs and DJs, and expanded it to CFOs and CEOs.  During that time, the industry has changed a great deal, but the focus of the Summit and its panels have remained consistent.

But when R&R went under over a month ago, we weren't sure about our next act.  And that's when the N.A.B. stepped up. 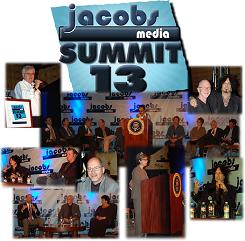 A few phone calls and emails later, we are proud to announce that the Summit has found a new home at the N.A.B. Radio Show in Philadelphia.

Thanks to John David, David Dziedzic, and the rest of the team in Washington, we've forged an exciting new partnership.  The N.A.B. Radio Show is a great platform for us, and a wonderful opportunity to reach more broadcasters.  This year's Summit will require an N.A.B. badge, which is part of the evolution of this event.  As we know, change happens.

You can expect the same level of relevance, buzz, and perhaps even a little controversy at this year's Summit.  And we hope you can find a way to get to Philly this year for the show.  Yes, you'll need an N.A.B. badge to attend, another sign of change as we evolve with the times.

But I can promise you that as has been the case for the past 13 years, this Summit will be worth your time and money.  As radio goes through painful change and churn, we need to keep growing as individuals and professionals.  As folks who work in other industries will tell you, conventions are still the center-point of learning, idea-sharing, and communication - even in a down economy.

As we've learned over the past 15 years of rampant consolidation and over-exuberant financial projections, no company is an island.  You can run 1,000 stations, have some great talent in your stable, and own a giant footprint - and still benefit from a healthy exchange of ideas, opinions, and new thinking from professionals outside your organization.

The Philly location should attract many of you to the convention this fall, whether by plane, train, or automobile.  And we hope that whether your company foots the bill or you pay your own way, that we'll see you on the convention floor, at the sessions, and of course, at the Summit.

We have a lot of work to do in the next eight weeks to put together an afternoon of great content, and we're already moving quickly to live up to the reputation the Summit has set.