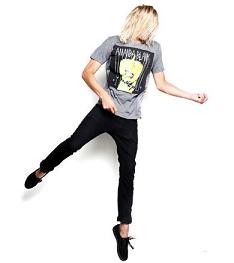 Last month, we talked about bands that are performing entire albums in concert, a new wrinkle for live music presentation.  Of course, as a band, you have to have released killer albums that can hold their own and the audience's attention, track for track. There aren't many albums released in the past 20 years that could make the cut.

That's why the latest new innovation that combines music and fashion caught my eye.  It's the Music Tee, and for $39, you buy a T-shirt with album artwork on the front, and the track listings on the back.  The shirt comes complete with a tag containing a URL that allows purchasers to download the entire album.

Great idea and a new way to sell music?  Perhaps.  But it seems ironic that the album releases (so far) are all from artists like Mos Def, Amanda Blank, and The Plasticines.

Pardon this observation, but the entire concept seems counter-intuitive when you're dealing with contemporary performers and a new music landscape that is essentially singles/song-oriented, thanks to an ADD-addled populace and the widespread use of  iTunes.

The only people listening to and buying albums these days tend to be 40+ old-schoolers who appreciate being able to put on Who's Next and listen all the way through, track after track. 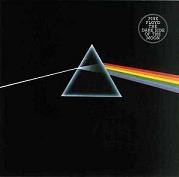 When there's a Music Tee for Dark Side or Abbey Road, give me a call.  In the meantime, this sure looks like an innovation that has demographically and psychographically been mis-targeted.

At The Eagle in Sacramento we just finished running the 50 Greatest Classic Rock Albums of All Time. Back in March we conducted a two week long series of polls on our web site.Each day there was new crop of songs to vote on. We compiled a list of about 375 albums to be voted on. Each day they were able to vote for their5 favorite Classic Rock Albums. from that days crop of albums. (Trying our best to spread each day's selections among artists and decades). We then tabulated the results and the staff researched, wrote, produced a vignette for each album. Each ran about 15 to 20 minutes and included three to four songs from that album. For each vignette we tryed to focus on the human stories behind the album and the drama within the band at the time the album was created. Making them very much like "VH1, Behind the Music". We then counted down the results on air, featuring a new album each week day and ran them at Midnight, 2pm and 8pm once they aired the vignette was posted on the web site.

Not having PPM yet in the market, I'm not sure how this featured perfomed on air, but the archive page were these are loaded, has had just a little over 10,000 hits since the feature started. We had an average of 750 people vote on each day's albums. And the feed back was strong enough for us to continue to re-run the feature on air with two new "honarable mentions" being produced each week to supplement the top 50 albums. Take a look and listen: http://www.eagle969.com/Airing-June-1st-through-August-7th/4336344

Curtiss, thanks for including this - a great effort to separate The Eagle from the many "automated" sounding stations that simply present the music without the concierge context. Hopefuly, readers of this blog will check out your efforts. Thanks for providing a great example of a deep dive into the album mentality of your target audience.

Sorry Fred, but this Gen-X-er has to disagree with your boomer evaluation of the music t-shirt. I too had come across the concept and think it's fascinating and dead on target.

More importantly, the myriad of ways people now discover new artists has made music at least as tribal as it ever was, if not more.
During the 60's and 70's wearing a Rolling Stones t-shirt marked you as part of a mass movement. Now wearing a shirt from a particular artist indicates being part of a micro movement that more clearly defines a person's individual tastes.

The music t-shirt isn't right for every artist, but for many with rabid core fans it feels like a great vehicle to actually get younger listeners to purchase new music as opposed to just downloading it.

Besides, who doesn't already have a "Dark Side of the Moon" t-shirt and why would anyone possibly need to download the full-length album?

Mike, you may be right. But I think that more than a decade of "song" downloads has taken its toll on the album-orientation of the young audience. I agree with you that wearing a T-shirt from your favorite Indie band makes a statement about who you are as an individual. But do young people really care about the other 8 songs on something called an album? And my main point is that they will sell many more Music Tees with "Abbey Road" on the cover. Thanks for contributing your opinions to the blog.