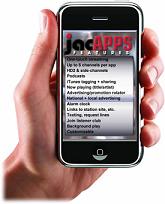 In a new "Programming To Win" piece I wrote for FMQB, the topic is all about the mobile phone revolution, and how the world is changing the way consumers entertain and inform themselves.

Since we started our jacAPPS division last October, we are closing in on 1,000,000 downloads, and in the process, we've learned a great deal about the mobile opportunity.  Our mentor is a marketing guru named Tomi Ahonen who avers that mobile is the 7th medium (following print, recordings, cinema, radio, television, and Internet).

He's right.  And everything that consumers can get from the previous six media - The New York Times, "Smoke on the Water," The Dark Knight, Bob & Tom, American Idol, and Pandora - they can get on their mobile devices.

Anyone who thinks that it's not important for radio to be available on smartphones is just not seeing the whole picture - or has a bizarre agenda.  Should stations do more than provide their stream on their apps?  Of course.  Smartphone applications need to be strategically designed in the same way that management teams and programmers approach their web sites, their texting programs, and of course, their overall sound.

Ahonen notes that with 4 billion mobile devices worldwide and climbing, phones now outnumber TVs, radios, and computers.  And a new study from the European Information Technology Observatory (EITO) reports that by the end of the year, 2/3s of the world's population will be using mobile phones.

So do you think it makes sense for your station, your personalities, and your podcasts to have their content available on mobile devices?

And make no mistake about it - consumers are using smarphones to listen to radio at a rapidly expanding rate.  Forrester Research now reports that one in ten mobile phone users listens to music on these devices, doubling last year's totals.

Jennifer Lane, President of Audio4Cast, notes that Pandora is ahead of the game when it comes to making radio listening on mobile devices an easy experience, and they also make it simple to buy music.  We continue to see Pandora growing by leaps and bounds since their app became available on smartphones, specifically the iPhone and iPod Touch devices.

It's another reason why Version 2.0 of our radio apps includes an iTunes feature.  Despite what musicFIRST erroneously claims, it is in radio's best interest to make it easy for consumers to be able to easily identify the music they hear, as well as to seamlessly buy it.  There's nothing more simple than elegantly buying music on mobile devices.

If your content distribution plan doesn't include smartphone apps - easily available in each device's equivalent of Apple's App Store - you may need a new strategist.