My Night At Red Rocks

While on a family vacation in Colorado a couple of weeks back, the weather was lousy, my 18 and 20 year-olds were getting bored, and we were looking for things to do.

It occurred to me that we were only an hour from the famous Red Rocks concert venue, which I've seen on TV and of course in that famous U2 video, "Sunday Bloody Sunday."

So, I went online, and discovered that to my surprise, my daughter's favorite hip-hop band, Atmosphere, was heading up a bill of five other hip-hop performers. So, I did the Ticketmaster thing, and we headed out to Red Rocks.

It was an education, and that's why I wanted to share it with you.

First of all, you have probably never heard of any of these acts:

Understand that this was a general admission show, and that Red Rocks seats about 9,400.  And these are all bands that receive little or no attention from radio. 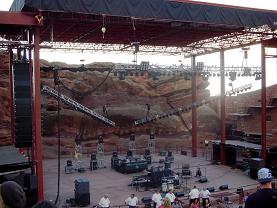 We arrived early enough so that my kids got nice seats in the 17th row, while my wife and I trudged up to the last row (70), offering a great view of the stage, and an even better view of Denver and beyond.  When we arrived at the show, there wasn't a person within 30 rows of us.

But by the third act, MURS (who is very good, by the way), we weren't so alone.  And when it was all said and done, more than 8,000 kids (I'd say the average age was around 21) had plunked down $50 a head to watch these bands perform.

The theme was pretty reminiscent of rock shows you've seen over the years - rebellion, alienation, your job sucks, the authorities have ruined the country/world, etc.  It's just that unlike the Who, the Ramones or the Arctic Monkeys, these bands receive no support from traditional record labels, no real radio airplay, and virtually no attention from traditional media. 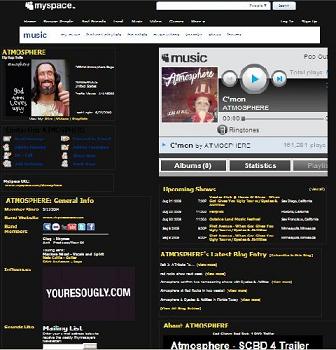 Atmosphere is led by a Minneapolis-born guy who calls himself Slug.  They have six albums, and he is truly a charismatic rapper (think Eminem with a heart). 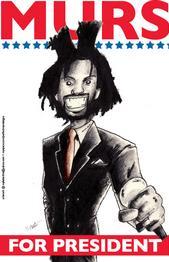 Part of the message was "God loves ugly," and 8,000 enthusiastic fans couldn't have agreed more.  MURS, by the way, is an acronym for "Making Underground Raw Shit."

How do these bands get their message across, and their music out?  They use social networking tools as well as anyone, and they nurture viral and word-of-mouth from their fan bases.  Yes, lots of this activity is organic - no satin jackets, no PD dinners, no backstage passes, no adds, no charts, no meet-and-greets.

As a result, there's an authenticity to what they've created, and it was on display in a very tangible way at Red Rocks.

In Alternative radio, we talk a lot about what really is Alternative, what is Indie, and how to best use (or avoid) these labels.  We've seen in focus groups that listeners call bullshit on these terms, because they know full well that the music so-called "alternative" stations play is anything but.

After watching this show and the audience, and thinking about its implications on both the music and radio industries (even the word "industry" sends a message), it becomes clearer that there really is Alternative, there really is Indie, and there really is underground music.  But of course, it's not on the radio.

And you can't help but grasp that the revolution is indeed viral, and that the power of word of mouth is inestimable.  Nickelback, and those who follow them, will always have impact on consumers and on cash registers.

But there is so clearly another way to do this, and it has nothing to do with labels, radio, or consultants.  Hopefully, I haven't created a mini "butterfly effect" for Atmosphere, and that fans like my kids can continue to enjoy and patronize these bands within their own fan-based networks.

It's impressive, and it says a great deal about how it's done in the new media millennium.