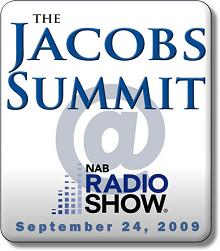 Need an excuse to register for the NAB's "Radio Show" next month?

Hopefully, we have four good reasons for you to make the journey to lovely Philadelphia in late September.  As you may know, our Summit this year is embedded with the NAB's show.  We've got that great Thursday afternoon slot (1-5 p.m.), and have just put the finishing touches on our lineup for this year.

Permit me the leeway to say it, but this may be our best slate of sessions in the 14 years we've been presenting Summits, first at Gavin, then with R&R, and now this year at the NAB Radio Show.

You've heard it too many times - content is king.  But there's a reason why smart observers of media keep repeating this mantra - because it's true.  Radio can talk about its free wireless distribution, its sizable cume, and its history of habitual listenership all it likes.  But without that content engine, it won't matter in our media future.

That's why this year's Summit is devoted to content - how to create it, market it, use digital tools to build communities to support it, and how to generate buzz for it.

Our opening session kicks off at 1 p.m. with Mark Hughes, author and viral guru of Buzzmarketing.  Mark "gets" the challenges of creating content that has a life of its own.  He's done it with his own dotcom, and will present some great lessons about how even revenue challenged radio stations and personalities can tap into the viral opportunity.  Mark's a great speaker, understands the radio mindset, and how to best leverage buzz among audiences.

We then move into learning from the Obama campaign, via the strategic genius of Scott Goodstein.  Scott heads up a company called Revolution Messaging, which specializes in social and mobile communication.  His session, "Creating A Winning Social Media Strategy - Lessons from the Obama Campaign," will create a lot of buzz of its own.  We all know how successful the Obama campaign was, when it came to building communities, making the most of texting, and creating great social networking strategies, and Scott will address all these areas.  Everybody tells you that you need a social networking strategy.  Scott will show you how to develop it, and make it effective.

Then we get into the content providers themselves.  First, we present the two stars of MSNBC's Morning Joe show - former Congressman Joe Scarborough and his co-host, Mika Brzezinski.  Joe & Mika are doing one of the best morning shows out there - on TV.  In this session, Joe & Mika will talk about how they prepare a daily radio-style show that gets ratings, and how they've successfully integrated a sponsor - Starbucks - seamlessly into the program.  And they'll even talk about their transition into radio, as they now host a daily program syndicated by Citadel Media.

And then the Jacobs Summit is proud to present the best interviewer in the media business, Terry Gross, host of the NPR program, Fresh Air.  Terry is a Peabody Award winner who has interviewed them all - from Bill O'Reilly to Gene Simmons.  At the Summit, we'll turn the tables, and yours truly has the task of interviewing the interviewer.  Along the way, Terry will talk about the Fresh Air approach to guest booking, show prep, and why her interviews sound like no others.  There're some great stories in her arsenal, as well as time for Q&A so you can ask.

So here're the basics:

4p - "An Interview with the Interviewer - The Summit Goes Inside the Mind of NPR's Terry Gross - featuring Fresh Air host, Terry Gross.

You'll need to be registered for the NAB in order to attend, so get moving, and as we say every year:

See you at the Summit!

Looks like a great line-up Fred. I'm sorry I'll miss it this year!