After last week's Apple "There's FM radio in the new nano" announcement, we celebrated the event in this blog.  This step is something of a validation for broadcast radio, long the victim of bad PR and a lot of media piling on.

OK, it's true that some of these wounds were self-inflicted, but radio has been the victim of the media's fascination with what's hot and new.  Amazingly, other "old media" - namely newspapers and television - often seem to be the source of much of this "radio sucks" coverage.

So when Steve Jobs finally decided that it was in Apple's best interest to admit that broadcast radio can be part of the portable entertainment menu - at least on the nano - it was one of those good news stories that so often eludes radio.

But the even better news came the next day in an Ad Age "Mediaworks" email blast.  In a story called "Radio Rejoices as iPod Nano Gets FM Tuner," writer Andrew Hampp liberally quotes the Jeff's - Haley and Smulyan - as both executives offer excitable comments about this technical development.

Recognition.  Validation.  Exhilaration.  Words that haven't been in the same sentence as "radio" for a long time now.

The Ad Age article, and all the other similar stories, should be part of the permanent arsenal in every radio sales rep's packets.  The next time a buyer or advertiser tells you that radio has seen better days, or that no one's listening, or is out of step with the times, just show them a picture of radio's newest fan. 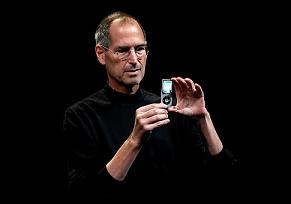 Post script: Yesterday I received a note from Randy Brazell, executive producer of the John Boy & Billy Big Show.  Among other things, Randy loves gagdets and technology, and was especially excited to hear about the new nano.  Here are his comments:

OK, so I picked one up on Friday and the device is awesome!  On the down side, I have spent the whole weekend being pissed off at our industry... once again we are in our own way.

This integrated FM tuner is a gift to our industry - and has huge potential to bring some of the cool factor back to radio... but I think that the tagging feature is critical to the success of it.  So, I ran down the entire FM dial from our parking lot - I was able to hit 22 stations.  Of the 22, only 14 had RDS enabled - and of them, only five stations supported the tagging feature.  ARRRGGG!!

The five stations do have something remarkable in common - they are ALL Clear Channel stations!  So, while I'm delighted that we're in the "part of the solution" crowd - this is something that our whole industry NEEDS to get on board with... if this proves profitable to Apple, FM tuners could show up on all of the iPod devices - We have the chance to be a free music sampling source for a whole new generation - are you and I the only ones left who remember what that was like?

What can we do?

Good question.  As always, your comments are welcome.