In what has to be a surprising announcement out of Cupertino, Steve Jobs himself announced that the new iPod nano will include an FM radio tuner.  In addition, this new nano features a live pause feature as well as iTunes tagging.  Apple is putting its own imprimatur on FM radio - as you might expect.

This is an incredible development from a company that never had any apparent desire to meld iPod's mp3 functionality with broadcast FM radio.  So maybe it was the new Zune HD Radio that influenced the choice.  But more likely it was Jobs seeing the same research that we've seen all the way along - iPod owners always wanted FM.  And now they can have it. 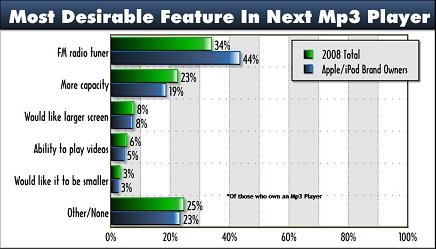 This may also be a sign that Jobs has a growing level of respect for broadcast radio.  At Apple's World Wide Developers Conference last spring, one of our FM radio apps appeared in a montage of cool apps - something that you just wouldn't expect from Apple.

Radio may be regaining some of its portability mojo.  And who would have thought that it would be Apple leading the way?

The only people I know who want a FM receiver in their iPod are the guys at the gym who want to ride the Lifecycle and listen to TV audio which the gym broadcasts on 88.1 FM.

But then I live in San Francisco and the radio sucks here.