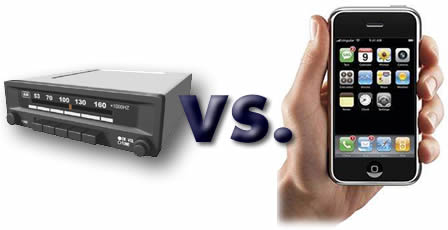 If you ever spent time as a radio station programmer in the '70s, '80s, or '90s, one of the keys to ensuring a healthy cume was to make sure your frequency was pre-set on one of those five car radio buttons.  It was an obsession.  Because if your station occupied one of those buttons, it was pretty much a guarantee of your viability.  In fact, many consumers claimed to not know how to change presets, so the chances were good that once you owned a button, you would always have that in-car advantage with that listener.

Some stations went so far as to cut deals with car dealerships to change the pre-sets on the cars in the lot so that at least one of the buttons would connect with your station.  I remember a company that made little rubbery caps with your embossed logo - called "Cappies" - that would fit right over most pre-set buttons to help your station stand out just a bit more. They never were very successful, but the strategy behind them made a great deal of sense.

Somehow, radio has gone from being obsessed with car radio buttons to being ambivalent about its presence on smartphones.  We're in the midst of a revolution, as more and more consumers are rapidly turning in their antiquated phones for sleek, elegant multi-use BlackBerries, iPhones, Palm Pres, and other "gotta have" devices that are carried everywhere.  In fact, more and more people are sleeping with their phones.

Many radio stations simply aren't in much of a hurry when it comes to smartphone presence.  Are companies holding back, perhaps waiting to see whether this entire mobile phone thing is here to stay?  Hey, haven't they read the memo that there are now 4 billion mobile devices in the world - more than there are TVs, radios, or computers?

CNN knows.  So does Associated Press, Hufflington Post, Bloomberg, and more and more media empires.  They realize the power of having their unique and powerful brands available as icons on smartphones.  Because if you're a fan of CNN for news on television, there's no reason why that habit wouldn't carry over to what you watch, listen to, and read on your mobile device.

The "beachfront property" that stations so dearly sought back when the Beatles were the next big thing has simply moved to a different zip code - smartphone "desktops."  And the good news is that radio stations can once again buy the best real estate in the market - and now, the world.

But if you doubt for a moment the importance of mobile, just listen to your new competition - Tim Westergren, CEO of Pandora.  This "radio station" on the Internet is growing by leaps and bounds.  We saw it in our last two Tech Polls among rockers, and now in our most recent national survey for Public Radio.

As revealed in a recent New York Times article, of the 65,000 consumers who register for Pandora every day, 45,000 of them do so on mobile phones.  As Westergren notes, "I'm beginning to think that our future is going to be more mobile-centric than I had even thought, and sooner."

I guess so.  And Pandora is accomplishing this without the aid of transmitters and towers.

Westergren also points out that a great deal of Pandora listening is occurring in homes and cars.  Just to make sure we all get his message, he reminds us: "It's giving Pandora access to the two big pieces of the radio market we've never been able to reach before.  It really allows us to become a much more serious and viable alternative to broadcast radio."

A shot across the bow?  Or a torpedo heading for the hull?