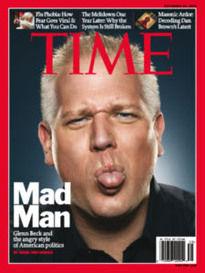 I received a couple of emails in response to our blog post that compared the austerity program launched by NBC's new Jay Leno prime time show to inexpensive Jack-FM stations.  I was taken to task based on the notion that I don't know Jack, and that the format's personality-less appeal has somehow eluded me.

I get it.  A station that features lots of variety, along with not much clutter or talk is going to find an audience.  That's why people like their iPods.  Of course, it may have trouble fulfilling sponsor and client needs, and it will face a myriad of digital challengers as more and more consumers avail themselves of the many options in front of them.

Be that as it may, I don't see Jack-FM on the cover of Time.  Nor do I see a story about how KROQ broke the new Pearl Jam single.  Nor that broadcasters are saving millions by voicetracking.

People care about people, personality, stars, celebrities.  It always has been that way, and as media proliferates and becomes even more controlled by consumers, our unique, proprietary talent is the Holy Grail that will keep radio relevant.   If we are committed to growing and nurturing it.

When was the last time a radio star was on the cover of a national news magazine?   Whether you think Glenn Beck is a brilliant political animal or a total putz, the fact is that the guy is a bona fide celebrity, he's making noise, and most importantly, he's on the radio.

We need to grow more personalities, not music formats that can be easily duplicated by Pandora, Sirius XM, or some guy's iPod.  And we're not going to do it by voicetracking nights, failing to market the great jocks that are already on the air, and sending out the message to advertisers that we just don't get it.

Hooray! Great piece. How about rediscovering the great talent that sits on the corner now, unable to get the time of day from today's programming clerics?

And where are the ads for classical stations that tell you what orchestra concert is going to be broadcast or what works are going to be performed?

I don't recall them ever having done that, but it's time maybe they should, as these stations have always made sure you knew the time of day, what works were performed and by whom both before and after they were broadcast, and even provide still full monthly playlists in many areas telling you who and what is going to be played. Even the aforementioned orchestra broadcasts.

But as to TV and print, you never see an ad for it.

Last I saw was an ad on a local bus for the local classical music station that said 'Ever nibbled on Beethoven's Ninth?'

Contemporary radio could learn a lot from what the classical broadcasters have done, even if it was not always all they could do.

Would Glenn Beck have made the cover of Time as Radio Glenn Only, or was it Fox Demagogue Glenn that really is on the cover of Time? To painfully quote Glenn, "I'm... just.... asking..... the..... question."

Fred, you're still my all-time favorite personality...and I have always lived in St. Louis. You're an all-star who belongs on the radio making all of us smile with your quick wit and observations. You make radio fun and cerebral simultaneously... if we get you off the sidelines.

Prediction: There will be a banding together of radio broadcasters with BIG PERSONALITIES (even if they are not household names) in the NEAR future.
Why?
With numberous media applications available on cell phones and computers (and WiFi) making things competitive against "jockless radio", it is only a matter of time when this occurs.

We who are "personality" broadcasters not only are willing to do it, we're somewhat mandated to SHOW UP the conglomerates.

Thanks for the great comments and observations. You could put together a dozen great radio stations with the "spare parts" of wonderfully talented ex-pat radio personalities who are sitting on a beach somewhere. It is truly tragic that so many radio companies are mortgaging their futures and ignoring some of the great performers who are ready, willing, and able to work. But as some of the commenters have mentioned, there are indeed other outlets, and we may be hearing from many (think Adam Carolla) on other platforms.

You are correct, sir.

The only possible entity that can make a station unique is a solid radio personality.