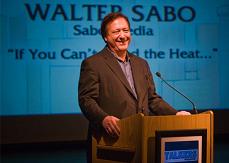 The story covered by Tom Taylor last week that consultant Walt Sabo and New Jersey 101 are parting ways is indeed an anomaly.  As Tom points out, consultants tend to hope that no one notices if they get dusted by a client, and just hope the story goes away.

But in 2009, the end of long-term relationships, like Walt and New Jersey 101, have become all too common.  It's one thing when a consultant isn't effective and/or the station fails to reach its ratings goals - for whatever the reason.

It's another to be cut from a franchise station that has succeeded for many years due to "budget cuts."

I have been thinking about the consultant/station relationship for some time now, and have remained silent on the topic.  But I feel the need to say something in the wake of Walt's departure from New Jersey 101.  I don't know the details of this situation, so no blame is meant to be cast.  But as Taylor's story notes, this was one of "the most fruitful relationships between consultant and station."

During a period when great talent has been cast aside by owners and managers faced with horrendous decisions about who should stay and who should go, consultants have been frequent victims - even in situations like New Jersey 101 where Walt's contributions are well-known.

I contacted Walt, who looks back on his 19 years with the station and is thankful for the relationship.  He reminded me of some of the particulars about New Jersey 101 that many of us may not know:

So you see, when it works, consultants function as partners, coaches, and consiglieres - that strategic, objective voice at the table who managers can turn to during times of feast or famine; during those gut-wrenching moments when a so-called impenetrable brand is under attack; or when a personality or show does something heinous or embarrassing, and cooler heads must prevail.

When I got into this business 26 years ago, my sense was that the industry's image of consultants was that of the snake oil salesman.  I heard stories where consultants double-billed client stations for travel, and other sleazy things that made making fun of us as popular as lawyer jokes.

Aside from trying to build a company, my goal was to do whatever possible to elevate the role of consultant, to provide a valuable service, and to make a difference in the success of our clients.  We haven't been effective for 100% of our stations, but I'd be willing to compare batting averages with anyone.

I am only too aware of the angry and anonymous naysayers who frequent radio geek boards, reveling in taking shots at us and others.  But I would bet that if you surveyed the people we've actually worked for over the past quarter-century, we've acquitted ourselves well.

So when I read about the Sabo/New Jersey 101 news, and I think about some of the brands our company has helped build over the years where we've unceremoniously been axed, it saddens me to see great partnerships go by the wayside during these desperate economic times.  Walter is right to celebrate his nearly two decades with New Jersey 101.  But he should still be advising the station.

Rather than lose enthusiasm for the business, we at Jacobs Media are energized by the great clients who still believe in our services.  As I remind managers who ask why a programmer needs a consultant, even Tiger Woods needs a coach.  It makes him a better player, and it provides him with outside expertise and perspective that he could not provide on his own.

Mel Karmazin used to ask me about long-term relationships with his Infinity stations, like WYSP and WXRK: "Aren't we ever cured?  Isn't there a time when we wouldn't need you?"

And of course, the response is that to build a great brand, to weather the storms, and to face the challenges that all media players inevitably go through, it's just good business to have a smart, ouside, objective, seasoned perspective - a consigliere.  Good consultants challenge station management and conventional wisdom.  They bring an outside view to the table.  They open a window to what others are doing in similar situations.  They will tell you your baby's ugly, when everyone else around you is telling you what you want to hear.

And in the case of New Jersey 101, the annual cost of a consultant is probably equivalent to what stations pay the night guy.  (Oops - I forgot that no one has night guys anymore.)

But as radio continues to burn the furniture, and now entire rooms in the house, much of this logic falls on deaf ears.

I expect this post will be met with responses ranging from "He doesn't get what's the financial realities," to more nasty, hyper-critical comments made by disgruntled former radio guys.  And that's OK because this blog doesn't have anything to do with you.

A lot of consultants have played a major role in creating, building. and maintaining some great brands - many of which have the strategic foundation to survive even the most heinous management decisions and cutbacks.

So, fellow consultants, this one's for you.  And congrats, Walt, on a job well done.

As a guy who first feared, then embraced having a consultant, I concur completely. I have had the pleasure and privilege of working with Jacobs Media for 20 years at 5 different radio stations. All were better for it. I am better for it. Thanks for calling my babies ugly when they were Silvio, er, Fred.

I'm kinda' speechless about jersey 101 dropping walt. his tenure there has got to be one of the most successful runs as a consultant in the radio biz. I worked for and with some of the smartest radio consultants in the business (including 5 years for sabo media) and when it comes to talk, especially the concept of fm and talk "formats," not just some vague concept of 'spoken word' or 'politics' or "sports," walter is really the only guy who really gets and got it. The success of jersey 101 speaks for itself.

Here, here, Fred. I learned a lot from Walter & currently from you through these posts. I was one of those radio guys that blasted consultants & now I don't. Then, I was frequently out-of-work & miserable at home. Now, I'm celebrating my 10th year in the same market w/the same company, the ratings are good & our station was the top biller in July. The difference? I employed a personal consultant many years ago. We meet frequently & discuss my biz & home life. His suggestions have been invaluable. Will I ever be "cured?" I've read too many business books to know that a desire to keep learning needs no cure.
Where do you find a personal consultant? Well, they go by many names: mentor, business coach, therapist, life coach, Walter Sabo, and Fred Jacobs to name a few. - BJ Shea (KISW, Seattle)