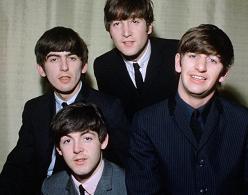 Perhaps with all the Beatles hoopla on 9-9-09 you missed the big story about a brand new Zogby Interactive poll.  Fortunately, Curtiss Johnson forwarded it to me, and I'm excited to tell you the suspenseful results.

This Zogby survey, conducted among nearly 5,000 Americans, conclusively shows that Paul is the most popular Beatle by far, garnering 27% of the total vote, followed distantly by John (16%), George (10%), and of course, Ringo (9%).

In a sign that the recession must really be over, Zogby goes on to report that John does better among non-church-goers and Democrats, while Paul rules among Born Again Christians.  Liberals are considerably more likely than conservatives to go with George.  And those who enjoy fried food overwhelmingly choose Ringo.

I made that last one up.

What is remarkable about all of this is that so many Americans have an opinion on this issue (but couldn't tell you Thing One about health care), and that they are able to differentiate one member of the Fab Four from another.

But that's the way it was in the '60s and '70s.  You knew who was who in bands, and you cared as much about them as the millions who now vote for the contestants on American Idol.

It wasn't just the Beatles.  You could differentiate between Mick and Keith, Roger and Pete, or Jimmy and Robert.  And even Sting from Stewart and Andy.

Maybe one of the many problems that the record labels haven't identified is their inability to grow and market performers as brands, rather than as commodities that are interchangeable.  Aside from the teen pop phenomena, like Miley Cyrus or the Jonas Brothers, or rappers (who always have a knack for building their personas), rock music has lost its edge partially because it has lost its personality.

We're facing some of the same problems in radio.  Aging stars with no one on the bench to replace them.

I sure would love to think we're smarter than all those record guys.  But talent development hasn't been a top priority for many years now.

Zogby didn't call, but my vote is for George.  Yours?

We will have an NAB/Summit wrap-up in Monday's blog.  Have a great weekend.

Another aspect of the talent problem in radio: a station manager tells their "Ringo" that they can no longer afford to keep him in "the band." So, they replace a beloved and familiar icon with "Pete Best"... Or even worse - an electronic drum machine.

In radio, we have eaten our seed corn. Because of extensive voicetracking, automation, etc, even in smaller markets, there aren't that many places for an up-and-coming talent to polish his or her delivery. So we get what we deserve-mediocrity.