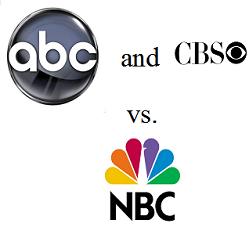 Remember the days when you were about to sign on a station and you thought the coolest thing you could do would be to somehow buy commercials on your competitor?  It would have been amazing to somehow promote your station on the big station across the street and alert your their audience that you've got something better happening down the dial.

But alas, that wasn't possible because no competitor in their right minds would let you promote your station, especially on their air, in one of their highly rated time periods.

Now segue over to television.  Jay Leno is now rocking along in prime time and of course, is more than happy to interview and showcase guests from other networks' shows.  Apparently, the execs at CBS and ABC aren't thinking that way.  They have essentially boycotted The Jay Leno Show on the premise that his new prime time show is competitive with their dramas that air at the same time.

Odd that for years, they had no issue with allowing their stars to appear on Leno's show when it aired at 11:35.  Or that they're fine with their big names showing up as Conan's guests.

Of course, HBO has taken full advantage of Leno's new show in order to promote the new Seinfeld-laden Curb Your Enthusiasm season.

But somehow, Katie Couric or Teri Hatcher appearing on Leno in prime time undercuts CBS and ABC dramas doesn't have enough cross-promotional juice to make up the difference?

Or maybe they just want Leno to fail so badly they'll do anything possible to make that happen, even if it means walking away from free promotion on another network's prime time show?

Or maybe they're being consulted by musicFIRST? 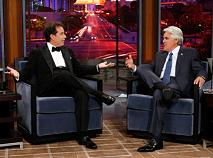 I don't know about you, but I'd love my big star sitting next to Jay on prime time - competing network or not.