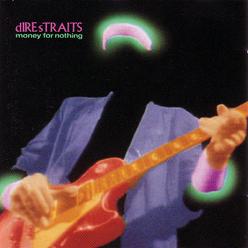 I admit it - I have always loved Dire Straits, and I've seen Mark Knopfler perform many times as a solo artist.  I even walked down the marital isle to one of his songs, much to the chagrin of my in-laws.  So when I received the email below from Ticketmaster, announcing that Knopfler is coming to nearby Ann Arbor, I got excited.

Until I saw the date of the concert.

More than seven months from now.  The 2009 baseball season still has a couple weeks left, but this concert won't take place until the 2010 campaign is a month old.

I would hope that Mark Knopfler will still be healthy and vital seven months from now.  For that matter, I hope that I am going to be vertical and mobile in late April. 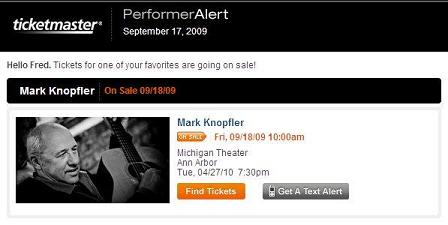 So what is Ticketmaster thinking?  Outside of a mega-event like the Super Bowl, does anyone plan that far ahead for a concert?

Is Ticketmaster in such "dire straits" that they need the cash flow that badly - and now?  Because my $200-300 "investment" in these tickets will just sit around earning interest in their coffers for the next two quarters.

I really would love to go to this show, but I just can't plan that far ahead.  That date is just "so far away" as I'm sitting here in Detroit in late September.

I had the same reaction when I heard that the indie band Pavement was planning on reuniting and touring...and I got excited reading the news and was looking forward to finding out when they'd be out on the road...their first gig, 2010...late 2010 in NYC and I thought WTF??? Why in the world are they announcing and pre-selling a concert I'd kill to see myself that's only going to happen ONE YEAR FROM NOW, heck, I'm hoping they'll come to lil' old Pittsburgh and play, I suppose I'll see an announcement for their show here in 2014 any day now and the tickets will be gone even before I can hit the website to buy them. What a joke, IMO.