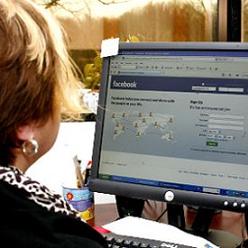 With all the tumult going on in 2009 between the economy, health care, and of course, Michael Jackson and David Letterman, one of the big stories may get lost in all the noise.

The growth of social networking – especially among adults – is beyond a phenomenon.  Consider what has happened with Facebook in a relatively short period of time – especially given its societal impact.

First, Nielsen reports that the percentage of smartphone users who access social networking sites has tripled in one year – from 6.4 million people in July ’08 to more than 18 million just twelve months later.

And it’s all about Facebook, something we were able to see early on in this year’s Tech Poll, conducted among rock radio listeners last February.  Nielsen data confirms that nearly 15 million smartphone users logged onto Facebook, followed distantly by MySpace (7.1 million) and Twitter (4.1 million).

As Google unseated Yahoo!, Facebook has annihilated MySpace, making you wonder how Rupert Murdoch is sleeping these days.  Between the pressure on his newspapers, and the erosion of MySpace, it’s been a tough year.

Secondly, we recently completed a nationwide tech survey for public radio stations – our second Public Radio Tech Survey – PRTS2.  And we saw some data regarding social networking that made us initially question the results.

Among public radio listeners – and we’re not talking about folks who generally profile as early adopters – the growth in social networking from last October to this past August blew us away.  In the first study in late ‘08, we saw about one-third (34%) of our sample indicate they visit/have a profile on a social networking site.  In PRTS2 – less than a year later – six in ten (61%) now interact with these sites. 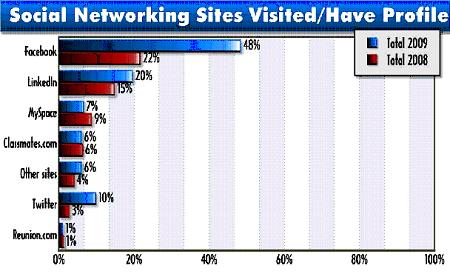 And our data indicated that it was all about Facebook – which more than doubled from survey to survey, while MySpace actually dropped in usage.

We scratched our heads trying to determine whether this was real, and then we happened across some data from iStrategy Labs, which not only confirmed Facebook’s meteoric rise, but indicated that it’s being driven largely by 35+ and even 55+ consumers – yup, just the demos that frequent public radio stations. 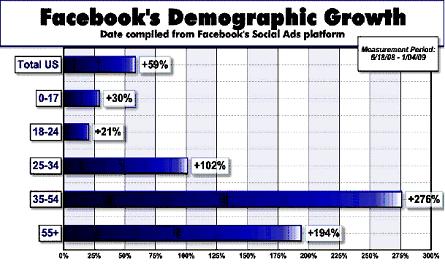 But most of you know all of this anecdotally, as you are either new yourselves to these sites – or you’ve been inundated with friends, family members, and industry folks “friending” you in the past several months.

Through this year, I’ll get a “friend” request from someone, and I’ll think, “SHE’S on Facebook?”  It’s happening quickly, and it has implications for radio – stations and personalities – as adult listeners are organizing and becoming parts of their own communities. 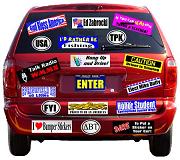 Back in the day, a bumpersticker on the back of your car made a statement about the kind of person you were.  Today, it is more about how you are using social networking tools to interact, and who’s in your network.

As we have been exhorting station managers for some time now, the need for a more sweeping social networking strategy is long overdue for radio.  How can stations and jocks create their own gathering spots, and as importantly, how can they tap into existing virtual communities that are already up and running?

Boomers are quickly catching up with Millennials.  Their kids have taught them how to text.  They are downloading apps in record numbers.  And they are social networking at an amazing pace.

The ways in which consumers interact with media – and each other – are morphing right before our very eyes.

This isn’t about new media or old media.  It is about the realization that the ways in which people interact with one another has undergone seismic change, and traditional media outlets need to understand and adapt to these changes.