I have used this space to criticize some of the HD radio hardware that has been released over the past few years.  For reasons that many of you know, there have been all sorts of issues and problems with many of these products, which have led to consumer frustration, as well as discouraging broadcasters who were once so hopeful about HD radio's promise.

So when Microsoft announced that their new Zune would feature HD radio as standard equipment on their new device, I wasn't exactly thinking optimistic thoughts.  But like all of us slogging through radio here in the 2000s, you cannot assume anything anymore.

As many of you know, we were commissioned by iBiquity last year to design a project to survey the radio industry about HD radio.  That research was delivered back in '08, and it belongs to iBiquity.  So while I cannot go into depth or detail about the results, those of you who participated either at our station management focus groups or the subsequent quantitative study know what you said and how you felt about the barriers facing this technology.  For those of you who weren't surveyed, rest assured that iBiqiuty got what they paid for.

HD radio has been severely hampered by a number of issues, which we continue to track in our publicly released tech surveys, conducted among both rock radio and public radio listeners.  While these respondents differ with one another in too many ways to list here, they agree about why they have not made the leap into HD radio technology.

This graph from the recently released PRTS2 is consistent with what we've been seeing in all our national surveys.  It lists the key speed bumps that turn off consumers about HD radio: 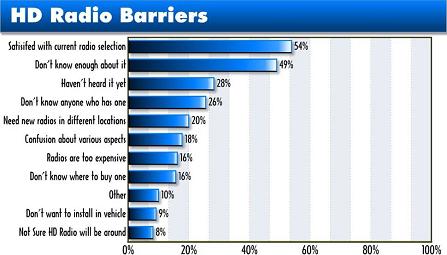 HD radio has not been well-explained to consumers - despite all the advertising.  And too many complain that they've never heard it before nor do they know anyone who owns an HD radio.  After all these years of marketing, you'd expect better grades.

But price point is an issue and as many expected, the declining costs of purchasing an HD radio are having a positive impact on the willingness to purchase: 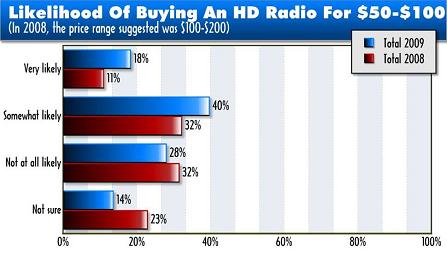 And the Zune might provide a boost, too.  Now don't get me wrong.  As an industry professional who has enjoyed the rising popularity of Apple gadgets in our jacAPPS business, I have no illusions that Microsoft is going to seriously dent Apple's mp3 player dominance anytime soon.  And perhaps that's the reason why the nerdy guy needed to come up with something hipper and different than the cool guy.

So without waiting for someone from iBiqiuity to send us a complimentary Zune, we went out and bought one ourselves on Amazon.  Tomorrow, we'll take a look at how it looks and works, and then discuss whether there's a "there there" for HD radio given some of these hardware steps in the right direction.

"New Zune To Include HD Radio"

"Bob Struble, President/CEO of iBiquity Digital Corporation, commented, We are very excited about the launch of HD Radio technology on Microsoft’s Zune HD. We are planning with the HD Radio Alliance to promote Zune HD to consumers."

MS decided to opt for the HD Radio chipset, along with those confiscatory HD Radio licensing and chipset fees, because of the free publicity for the Zune HD from the HD Radio Alliance; the previous Zunes only sold about 3 million, versus 170 million iPods. I'm sure those Zune HD consumers will be really pleased about the crappy HD Radio recepion and dropouts.

If one looks at the sales rankings for the Zune HDs, the 16GB Zune HD has fallen off the top-100 in Amazon's electronic sales, and the 32GB version is at a miserable 40th place, at one time falling to 44th. Of course, this lack of consumer interest can be extapolated to other retailers, as well. What is especially interesting, is that the new iPod Nano's, with those ANALOG FM-tuner for tagging, is at a miserable 24th place, showing that the addition of FM-tuners in MP3s has not made those devices more desirable:

"HD Radio portables — No one's buying a lot of transistor radios anymore. The headphone radios that people used to run around the park with are all gone, and if radio wants to continue to be a reach medium, they've got to be in the devices people carry, which increasingly are cell phones, MP3 players, personal navigation devices... Insignia HD — I think this will be a nice little interim step for jogging or working out. It proves the viability [of the technology] and hopefully we'll get sales; but no, this is not going to sell in the hundreds of thousands... Radio alone — the sad reality of where it is — as a standalone device, it just doesn't exist anymore as a category. Nobody goes into Best Buy and says 'Where's the radio department?'"

Bob Struble admitted that the Insignia sales have been a flop, as all HD Radio sales, but we already knew that (I think that Struble stole that Best Buy comment from Orbitcast).

How long does iBiquity and their unwanted digital system have to hang around before the world gets so tired they vomit? Consumers have demonstrated lack of interest and so have most manufacturers - many of which have abandoned it. IBiquity had to go to some no-name company to get a chip-set because the big ones decided long ago it wasn't worth it. (Sony for instance) Is that the plan - force feed it till the world finally gives in or it's mandated by the FCC? All you proponents claim a big victory when there's a little tiny sign of life in a just-about-dead technology that its become laughable if it were not so sickening.

I love blog posts about HD radio. It's like a morning show spending an hour on Michael Jackson or cheating sposues - it's guaranteed to get the phones ringing. With HD radio, there's never a shortage of emotion or opinion. Today's post clearly talks about the immense challenges facing HD radio, graphically underscored by the chart labeled "HD Radio Barriers." It is far from glowing or positive. So don't shoot your wads today, when there's a second part to this post. And thanks again for reading our blog.

I don't believe you're still pushing this junk.

Really - It's time to move on from iBiquity and hd radio. It's not working and the issues and problems will only get worse when/if a power increase is granted. Time to pull the plug.

Well Fred, seems to me that most radio listeners don't even know they need hd radio. HD radio is a phenomenon generated by people in business with large pockets and, ironically, the same people that are destroying radio. The ones that comment on blogs like these are mostly the "little people" who actually see the scam that's perpetrated by those large pockets.