As we discussed in yesterday's blog, the HD radio initiative has had its share of ups and downs.  Speaking of the former, the new Zune with HD radio caught our eye, and we ordered one early on from Amazon.

In the short video below, I'll show you just a couple of things about the device - its look and feel, along with the video interface, and most importantly, the HD radio functionality.

So, whether the Zune is a runaway success or not, the $50 Insignia model and more HD radio becoming available in new cars, suggest there is reason to believe that many more people will have access one year from today.

What does that mean for radio, and at what juncture is there a tipping point that would influence broadcasters to get more serious about creating more competitive content for HD2 stations?  As it stands now, what quality of content are they hearing on HD2 stations, and why would it motivate consumers to actually buy one of these radios or mp3 players?

I keep going back to that "Stimulus Czar" panel from last month's NAB, and all the controversy that Larry Rosin stirred up with his impassioned plea to inject more youth into radio stations.  At that session, I also  implored broadcasters to stop voicetracking and start using the late night hours for "DJ Beta" development.

And that's where HD2 stations could come in to serve as incubators for developing new talent, while reinforcing to young people that there is a place for them in the radio industry.  It has been interesting in the wake of that panel to read the back and forth comments from broadcasters, ranging from those who are gung ho about the need for young people in radio jobs, to those who defend the quality of radio being produced by the old guard.

Wherever you stand, the numbers don't lie.  Most traditional media are facing the same situation, where heritage talent and stars aren't getting younger.  And a look down the bench isn't reassuring because of the lack of proven young talent waiting in the wings.  Radio really has no viable personality succession plan.

HD radio could be a way out.  I have heard many broadcasters articulate that a certain number of HD2 channels should be dedicated to colleges and high schools - giving young people an opportunity to learn radio in a "real world" situation.  But it hasn't really happened.

Maybe this is something the HD Alliance could consider, after the initial initiative that assigned many of those bland formats to HD2 channels.  That experiment is over.  It didn't work.  But that doesn't mean that HD2 channels cannot be deployed in ways that would actually benefit radio, especially given the rampant voice tracking that has taken over the late night hours.  All the new gadgets in the world won't mean much if there's nothing worth listening to. 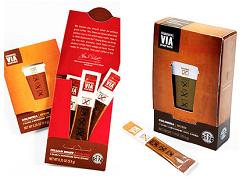 In the past few weeks, Starbucks has proved that it's possible to invent and create within your specialty area with their new Via instant product.  Whether this initiative works or not, the attempt to do something new, to start a conversation, and to make their brand more top of mind is smart and potentially rejuvenating for their stores.

Radio needs to consider something that accomplishes much the same thing.  In a media world where "new" is what consumers are seeking, radio needs to make a statement that communicates that we are about new, different, bold, risk-taking, and creative.  While some broadcasters view HD radio as a mission that failed, the question is how it can be repurposed to provide value and to make a contribution to radio.

As I said yesterday I don't believe you're still pushing this junk. Did you ever stop to think that maybe the reason it has been a dismal failure from the word go is because the small amount of people who have actually tried it including yours truly know how really badly it performs? The techies who make or break a new product moved on about a minute after they turned one one of these turkeys.
Perhaps you'd like to buy an Edsel dealership?

They already are, by jamming competitive adjacent-channel stations off the dial, replacing their signals with programmng from the HD Radio Alliance owned stations' HD2/HD3 signals. You will never get consumers to by into HD Radio, no matter what you put on the side-channels (especially Gen Y), but by destroying adjacent-channel stations, this is a way to try and force Highly Destructive Radio. There is something called ION:

"We Might Want to Keep an Eye on ION"

"If the commission embraces the notion that secondary digital streams really do constitute separate licenses that can be separately assigned, one could easily argue that radio stations that have opted to transmit digital streams (i.e., 'HD Radio') should also be permitted to sell those streams as separately licensed stations... For one, the number of radio stations could theoretically double or triple overnight. This might not have the cataclysmic effect of, say, the injection of nearly 700 new FM allotments through the notorious Docket No. 80-90 a quarter century ago, but you never know. At a minimum, if the law of supply and demand were to hold true, the overnight doubling/tripling of stations would likely depress each station's value. And such a rapid increase in the number of stations would logically lead to a similarly rapid increase in competition for audiences and revenues. Are we all ready for that?"

Naturally, HD Radio makes no business sense, unless these HD2/HD3 signals destroy competitors' signals, which they do. Hopefully, at some point, there will be an invetigation into the iBiquity/FCC relationship, or litigation at the very least.