« Superheroes Wanted 2 | Main | Money For Nothing »

A couple of months ago, this blog drew your attention to a great full-page ad run by Target, asking for consumer feedback.  The headline was "Tell us what more we can do for you."  At the time, we applauded this effort, but also qualified our praise with the hope that Target would follow-up the ad with bona fide action steps.

We call it "research as marketing" - marrying research initiatives with marketing solutions.  In short, ask for feedback, analyze the results, craft solutions, and then promote the actions that were directly attributable to the questions.

And Target has done just that.  The follow-up double-truck ad is titled, "You asked for more.  Here goes."  And on the second page, Target shows consumer problems/complaints, followed by their solutions.

So, the "You said" part reads: "You could do a much better job of replenishing your stock, especially in food."

And the follow-up "What we're doing" reads: "To better meet our guests' wants and needs, we're making improvements to our replenishment methods.  Specifically, in the refrigerator/freezer cases, product is being filled every hour - directly from the truck whenever possible." 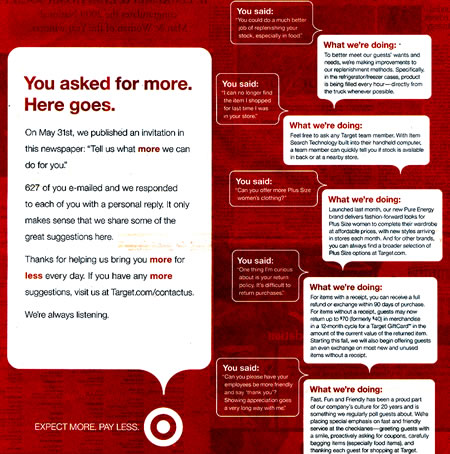 The ad includes four other feedback/action examples, reinforcing the notion that Target is responsive to the concerns of its "clients."  In this way, consumers feel like they "own" these improvements, rather than the typical corporate top-down policies.

Any radio station could and should do the same, because it's not as if broadcasters aren't doing research.  Web polls among email databases, and even pricier perceptual studies all offer opportunities for stations to derive greater value from their research dollars.

This is not the time for quiet, subtle changes that we hope listeners will notice.  There's so much advertising and media noise that it's imperative that radio "broadcasts" its changes and improvements, especially to a consuming public that likely questions whether stations really care.

Sure, there's some potential downside risk in admitting a weakness or an area that needs improving.  But as Target is showing in this series of ads, owning a problem and then solving it is powerful marketing.  And you're sure not seeing anything similar from K-Mart, Nordstrom's, or Macy's.

By the way, this expensive campaign, full-page, national print campaign in USA Today only elicited 627 email responses.  It's hard not to imagine that a national radio effort couldn't have generated a better response.  We have seen individual stations receive hundreds of emails in similar "How can we get better? campaigns.  Maybe next time, Target's agency will try radio.

You know, Fred, Radio has been doing this "you told us what you want and now we're giving it to you" line since the early 80's. Now, everybody else is doing it--to your point, Target.

It's old, tired lacks credibility...the lack of response (624) it got from USA Today (millions in circulation) indicates just that.

Radio used to LEAD...not FOLLOW. The "tell us what you want" worked really good when FM radio was developing. It's used up! Like its AM predecessor, it's time to LEAD--set the tone, with content developed to entertain. Instead of researching "what people want", let's find out what "makes people laugh" (for example).

John, thanks for the comment, but I beg to differ. There's always an opportunity to better serve customers, and radio has fallen short in this department. When you call a request line and get a busy signal, an endlessly ringing phone, or an ambivalent voice on the other end of the phone, that's not customer service On the sales side, one poor guy producing commercials for six stations' advertisers isn't customer service. Radio would be much better off if broadcasters got more in touch with their two key constituencies and did a more professional and through job of serving them both.