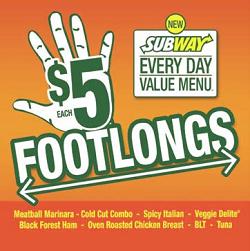 One of the big franchise food successes of this year is the $5 footlong, first popularized by Subway, and now being copied by a number of competitors.  This innovative campaign generated $38 billion in sales nationwide, and vaulted Subway into the Top 10 fast-food brands in the U.S.  And it happened in the most difficult financial year, which is why it proved to be even more valuable to the company.

But the interesting thing about this concept is that it didn't come out of focus group research, bit strategic initiatives, nor was it someone's idea at corporate.

Instead, it was the brainchild of a Subway franchisee in South Florida who tried the idea over weekends at two of his stores.  When he saw long lines out the door, he knew he was onto something.  Along with other local managers in the region, he pitched the concept hard to a skeptical corporate staff.

To everyone's credit, the Subway brass jettisoned yet another "Jared" campaign, and the concept was tried at an under-performing Fort Lauderdale store.  Then the company's marketing head was wise enough to fly to Florida to see the campaign work for himself.  After some back and forth negotiations with the franchisees (sounds a lot like herding cats), the footlog sub concept was rolled out nationally with the aforementioned stellar results.

So what's the lesson here?

First, during difficult times, just trying different concepts has merit.  Companies can beta ideas in isolated markets or formats to gauge acceptance without it harming the global business.

Second, there are instances where the people on the ground in local markets have a better sense of what's going on than the corporate executives.  It is one thing to read about business ideas in the Wall Street Journal but another to hear it from one of your managers who is at eye level with consumers.

And finally, it may have taken Subway a while, but eventually, this idea was accepted and supported at the corporate level, and expanded to the company as a whole.  In some environments this never would have occurred.

In radio, how many potentially great ideas are laying dormant at the local station level that just could be "game-changers," like the Subway footlong concept?  Do local broadcasters feel they have the freedom to be able to move ideas up the funnel for a serious evaluation by corporate?

As we are reminded in the trades, radio CEOs are consumed by reducing debt and getting their financial houses in order.  Operations guys are just trying to figure out how to do more with less staff.  No one has time to think about new, innovative ideas in this challenging environment.

But that's where the DJ in Omaha, the sales rep in Fresno, or the APD in Orlando just might have that great idea, bubbling under the surface with no way to break out.  At a time when the industry needs a breakout concept, you just never know where it might come from.

Just ask the folks at Subway.