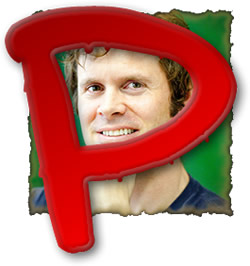 There is sure to be a lot of controversy about ABC-TV's new V, which debuted earlier this week.  If you haven't tuned in, it's the saga of a charismatic new leader offering the promise of hope and peace.  Of course, it's all cleverly disguised and is, in reality, an alien invasion.

Politically, the show raises the idea about questioning what is right in front of everyone's eye, while the media jumps on the excitement bandwagon.  Clearly, Obama followers, fans, and pols will not be happy with the tone and messaging on V.

I'm looking at the show a little differently.  Substitute a "P," and you've got the phenomenon known as Pandora that is doing a pretty good imitation of its own alien invasion, trying to take over the world.  It, too, has a charismatic, compelling leader in Tim Westergren.

And unlike the plot line in V, Pandora's takeover plans are transparent, candid, and outside our front windshields. Unfortunately, most of the leadership in radio somehow cannot see what a threat to the industry that Pandora represents.

And it's not like Westergren is hiding his plans.  In multiple interviews, he talks about his growth plans, and substantial successes in making Pandora available to consumers on different platforms.  Consider this:

Pandora adds 65,000 new registered users every day.  Of these, over half come from mobile phones.  Overall, he says that Pandora now has 36 million sign-ups.

Overall, 35% of Pandora usage comes from users who are listening in cars.  Westergren notes that a growing number are plugging in iPhones and other smart phones into the "aux" input on dashboards, and he's aiming to have Pandora embedded in vehicles (much like he's accomplished with phones).

Westergren is actively lobbying for broadcasters to pay what he calls their fair share of music licensing fees.  Claiming that Pandora pays 60% of its revenue in fees, he is pushing hard for radio broadcasters to pony up.  And in that process, his sheer heft and hipness makes him a compelling, persuasive voice.

While Pandora is still trying to monetize itself, it is making bona fide progress.  The service sells $1 million in revenue on iTunes every month.  And Westergren estimates that Pandora will generate revenues in the $40 million range in '09.

So, when we see radio companies continuing to battle only with one another, while totally missing what's happening outside of our shrinking empire, it is difficult not to wonder why the industry isn't taking a larger strategic inventory of the real competition for radio.

For so many years, corporate executives have pooh-poohed the Internet, streaming, texting, social networking, mobile devices and other gadgets.  You know the excuses:

"When we can make money from it, we'll start doing it."

"When there are more mobile phones out there, we'll look into branded applications."

Westergren must laugh at this because he has all that broadcast radio revenue in his crosshairs.  As he explains it to AOL's Daily Finance: "In the last year there has been a big sea change in the infrastructure surrounding radio.  That's driven by the ability of cell networks to carry a streaming audio signal.  That a phone can now stream Pandora has broken open what until now was a domain occupied only by commercial radio (satellite or broadcast) either in cars or homes.  I think this new ubiquitous streaming capability is a hugely disruptive change that will put Internet radio right up alongside broadcast radio."

And in fact, Westergren's goal is to displace broadcast radio, and he's tipping his pitches, telegraphing his passes, and allowing radio into his huddle.  And broadcasters still don't realize what's going on.

Here's an on-the-streets case in point.  With all these millions and millions of registered users, Westergren still finds a way to keep it personal and real.

Pictured above is a personalized email that our Tim Davis received from "Tim" last month, inviting him to a Pandora "meet-up" here in the Detroit area. 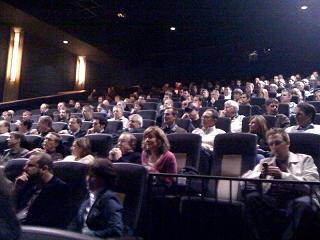 More than 200 enthusiastic ADULTS gathered on a cool Monday night at the Palladium theater complex to hear Westergren speak, and to get a T-shirt.  How many local stations could have pulled this type of crowd - without cheap drinks or a football game on a big screen TV?

And he did not disappoint.  Westergren is a charismatic, folksy, unassuming presenter who comes off as a music fan who just wanted to create a radio station that would play more and better music than what he grew up listening to on the FM band.

And make no mistake about it.  In this video segment that we recorded, Westergren leaves nothing to the imagination about his long-term plan to put broadcast radio out of business.

So while radio programmers are wrestling with each other in the mud, or rushing to beat each other out for the honor of who will be the first to play "White Christmas," Westergren has a higher mission.

And while our sales departments are running around, giving away inventory and bonus spots, Westergen is creating value for his growing bevy of Pandora sponsors.

And while radio ownership is still shutting down streams, waiting to commit to smart phone applications, and slow to invest in cohesive, integrated digital strategies, Westergren is rapidly eating their lunch.

Yes, it is easier to charge up the hill on an exciting mission like Pandora than it is to play defense and protect the throne.  But if broadcast radio is to succeed in this awful test of finances, innovation, and strategy, it must get serious about the real enemy.

Or maybe it's just that famous quote from Pogo.  You have to believe that's what Westergren is banking on.

No sooner does this blog appear than Ando Media releases its latest streaming ratings data. While CBS Radio is on top, Pandora is a very close #2. Pandora's not perfect - as Bob Lefsetz notes in his latest rave, Pandora is like "listening to what you don't want to get to the shit you do." But Westergren has his eye on the prize, while broadcast radio is more focused on the what the station down the dial is doing, rather than where the puck is going - streaming, mobile, digital.