Old friend and veteran rock programmer, Ron Nenni, sent me an eye-opening chart, courtesy of the Silicon Alley Insider.  As you can see below, a new Nielsen analysis of a media use study conducted by the Council for Research Excellence shows that radio out-reaches the Internet on a daily basis. 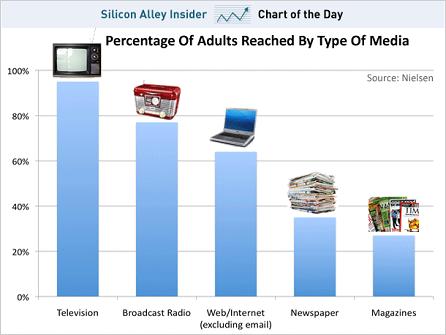 The methodology of this study is observing consumers, rather than allowing them to report their media.  It sounds like another form of ethnography, the methodology we used in the Arbitron "Bedroom Project" a few years ago.  This study covered five markets and the research was conducted in '08.

Because radio is often a background medium, it was "on" more than perhaps people might actually report to an interviewer.  So, the end result is that radio comes into contact with 77% of consumers, compared to 64% for the Internet.  Of course, TV dominates, while the death watch continues for newspapers and magazines.

A deeper look into audio device usage by time spent listening across locations shows that broadcast radio is still dominant. It is impossible to know what this data might have looked like a decade ago.  Clearly, broadcast radio would have been in the 90% range in all three locations.  But even this recent data shows that while different gadgets and media outlets are eroding radio's dominance, the numbers are impressive.

Now nay-sayers will have no problem shooting these charts down.  Perhaps lots of this radio listening is indeed background.  And of course, reach does not equate to engagement.

But this information also suggests that the cost (free), simplicity (wireless/good reception), accessibility (it's everywhere), and sheer habit still make broadcast radio stations an attractive source for everything - from exposing music to advertising.

Those who write off radio should perhaps rethink their logic.  But those who own broadcast radio companies should consider the half-empty implications of these charts.  Radio is a leaky bucket, and the options are growing and are plentiful.  But with the right investment in research, content creation, personality development, and the strategic applications of digital tools, the medium still has a great deal of life and vitality.

It's the beauty of research because it's very much dependent on who's looking at the data.