The Mother Of (Re)Invention

This is a story about reinvention.  It's about taking stock of your strengths, weaknesses, opportunities, and threats.  It's about facing up to reality, and responding with creativity and courage.  Many former radio employees are facing this tough task right now, as they face months of being out of work, with few prospects ahead.

But widening the lens a bit, it might also be a story about the radio industry itself, faced with ambivalent audiences and eroding revenues, trying to find ways to repitch its model to become vital and exciting once again.

Our story starts with the CMAs.  If you saw the show or read the news reports about last week's mega Country show, the big headline was 19-year old Taylor Swift, who took four major awards, including the coveted Entertainer of the Year honor.

But perhaps the more significant news below the fold was the award for "Best New Artist of the Year" - Darius Rucker.  Yup, the same guy who fronted Hootie & the Blowfish back in the '90s, whose fortunes sank quickly and deeply - just like Men At Work, INXS, and so many others.

The difference is that after a decade of obscurity, Rucker turned his career around, addresessed his negatives and his opportunities, and created a Second Life in country music.  In thanking the CMA, he commented, "To the fans, thank y'all for accepting me.  And I think most importantly, to country radio, you took a chance on a pop singer from Charleston, South Carolina.  Thank you so much for that!"

Rucker has learned how to adjust his act for a new market, making him one of the few African-American artists to make it big in Country.  And all of this, after everyone was convinced he was a total washout back in the late '90s. 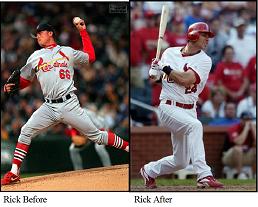 Rick Ankiel is another example of reinvention.  Baseball fans remember him as a once-promising major league pitcher for the St. Louis Cardinals.  As a rookie in 2000, he posted an impressive record with 11 wins, but quickly found himself facing a wild streak that he could not control.  Later it was a series of injuries, and by 2005, he was out of the game and was written off by anyone and everyone in baseball.

As we know, it's not uncommon for athletes to lose it - to have a good season or two, only to fall apart, get hurt, and be permanently finished.  But like Rucker, Ankiel reinvented himself - as an outfielder and a power hitter.  He re-emerged with the Cardinals in 2007 and has successfully converted himself into a great position player.  In '08, he hit 25 home runs, and he has made some spectacular plays in the outfield that have become "Sports Center" highlights. 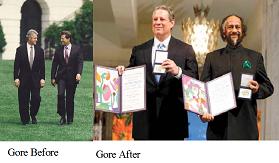 Finally, Al Gore.  We all know the narrative.  As Bill Clinton's VP, he was perfectly positioned to win the Presidency in 2000, only to be bested by George W. Bush, following the Florida vote-counting debacle.  Despite winning the popular vote, Gore was branded a wimp and loser by pundits.

Most former Presidents and Vice Presidents end up playing golf or becoming expensive guest speakers on the circuit.  Few make much of an impact after leaving office.

But Gore totally reinvented himself as an environmental activist, winning an Oscar, a Grammy, and ultimately, the Nobel Peace Prize.  He has also made an impact in the media world, as co-founder of Current TV, an experimental user-generated television network.

Like Darius Rucker and Rick Ankiel, Al Gore faced some difficult facts, confronted some ugly failure, turned his career around by taking advantage of his innate talents and passions, and in the process, subsequently had more impact on the world than when he was an elected official in Washington, D.C.

These are rare stories, because the has-been lists in popular music, professional sports, and politics are long and tragic.

New successes are possible, but not by continuing down the same bankrupt paths.  Clearly, Rucker could have tried releasing more rock/pop songs, Ankiel could have attempted to find his pitching prowess, and Gore could have run for office yet again.

But they realized these old strategies were all non-starters.

Sometimes you have to face facts, make a tough assessment, and turn things on their sides in order to get back on a winning path.

The radio industry - and many of its former employees - could take some degree of solace from these stories.  But only if investments in time, money, and honesty are made.

Not every comeback, mash-up, or reinvention will succeed.  But driving around the same cul-de-sac is a sad and predictable recipe for failure.