JacoBlog - Jacobs Media's Blog: The New King of All Media?

The New King of All Media?

Here’s a guest post from Jacobs Media’s talent guru, Keith Cunningham, with some observations about a new celebrity phenomenon.

Cincinnati Bengals’ wide receiver, Chad Ochocinco is at it again.  But this time he’s not changing his name, hilariously trash-talking with opponents, catching touchdowns, or racing thoroughbred horses – he’s on the way to becoming a media monster.

The outspoken NFL star has partnered with Motorola to set up a social news network on Twitter, dubbed OCNN (Ochocinco News Network).  His goal is to compete with mainstream news outlets and tell fans what’s going on with NFL teams.  Don’t laugh – it’s not a bad idea; he’s the ultimate insider and will probably dig up some compelling dirt.

After all, who has the best access to what really happens in the locker room?  As Ochocinco promises, “"If I break it, you might as well believe it."

While it’s early in the game for the OCNN, this is another sign that traditional media is being challenged on every level.  When you think that it was TMZ that broke Michael Jackson’s death – not CNN or NBC – Ochocinco’s concept doesn’t sound so crazy.  It’s also proof that anyone with motivation, creativity, access, and resources has the ability to participate in, or even change, the entertainment and news landscape.

The OCNN will not replace ESPN or the NFL Network for football news.  But gone are the days when ESPN had a lock on sports news, when newspapers and TV owned breaking news, or when radio owned music and traffic reports.  Citizen journalism (and in this case football star journalism) is thriving. 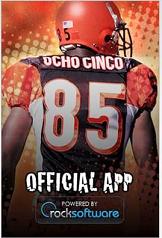 It’s hard to stand out in today’s crowded field, but radio personalities should take notice of Chad Ochocinco’s efforts and begin thinking of ways to grow their own personas outside of the traditional airwaves.

Could a radio personality pull this off on a local level, or in the case of syndicated shows on a national scale?  Keep in mind their advantage in being able to promote initiatives to large audiences each day.  In the digital world, a big-thinking personality can do big things.

As an addendum, Ochocinco was fined $20K today for trying to bribe an official with $1. He also wanted to send mustard packets to the Steelers defense this week, but his coach wouldn't let him. Ochocinco is becoming more and more Stern-esque every week. He knows how to get attention and it'll help him in the long run (even if the Steelers break his leg this weekend).

Bribing football officials is a crime! Or at least a 15-yeard penalty.