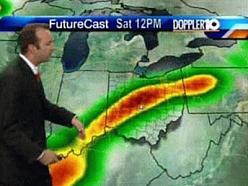 Where is it going?  That's always a big topic, and the blogosphere has no shortage of experts and geniuses who will tell you they have the answer to what's ailing radio, and what we'll all be doing in five years.

It's a lot like the stock market.  There is the ongoing avalanche of analysts, many of whom have great credentials.  But then there's Warren Buffett.  Yes, he's had a tough year, but over the long haul, investing in his Berkshire Hathaway has been a pretty good bet.

Google has amassed a pretty solid track record, too.  Not all their experiments and projects have paid huge dividends - like radio advertising - but it's tough to argue with their track record.

That's why their recent purchase of AdMob caught my attention.  For a mere $750 million in stock, Google now owns another piece of the mobile ad machine.

This is especially noteworthy because it signals another investment in the mobile space for Google.  As we have learned at jacAPPS - our mobile application division - there is an abundance of optimism, and it's backed up by industry metrics.

Paul Palmieri, CEO of Millennial Media chimes in with his view: "Today Google validated what many companies including Millennial have thought for years - that mobile is a different market with a huge potential for advertising; possibly a bigger opportunity than online media."

It's interesting that we first started our mobile division, and then actually went to school on this space.  My best teacher has been a Finnish consultant, Tomi Ahonen.  He now lives in South Korea, and is the author of Mobile as 7th of the Mass Media.

This guy totally "gets" what's happening in mobile, especially in more advanced countries outside the U.S. (as odd as that sounds).  It is more than a little interesting that in in other parts of the world, credit cards are becoming rare while more and more consumers are paying for everything with their mobile devices.

This is where the action is.  In a recent article, "What Hath Apple Wrought,"  Inside Digital Media president, Philip Leigh, notes that "outside America, most people connect to the Internet over a mobile device.  At 1.2 billion units, worldwide mobile phone sales are about four times those of personal computers."

And it is mobile that has turbo-charged the recent growth in Pandora sign-ups.  More than 45,000 of the 65,000 new daily registrations for that Internet radio channel come from its various mobile apps. "Our future is going to be more mobile-centric than I had even thought, and sooner," says Pandora founder Tim Westergren.

And all this at a time when some broadcasters are still debating the wisdom of streaming.  The winds of change are blowing hard, and there are no signs of a letup.

Mel Karmazin thinks this Christmas will signal a significant rise in the sales of satellite radio.  My money is on mobile gadgets - iPhones, Droids, and the like.  With WalMart, (Radio) Shack, BestBuy, and Costco all selling more affordable iPhones and iPod Touch devices, the forecast calls for an even more ubiquitous mobile environment.

You don't need a weatherman to know which way the wind blows.