Here's a guest blog from rock radio programmer extraordinaire, Keith Hastings, the guy behind The Hog in Milwaukee.  Keith is a hardcore radio guy, who admittedly spends time listening to Pandora.

I was messing around with a Jackson Browne “station” on Pandora the other day, and on comes “The Load Out/Stay.”  Cool.  Nice long song, doesn’t get overplayed, I settled in and turned up the earbuds.

Then a funny thing happened, as I began to sing along to the lyrics….

“But we'll be scheduled to appear, a thousand miles away from here…"

That’s where the computer geeks stopped the song, instead of letting it naturally progress into Browne’s cover of “Stay” - the way I've heard since the album came out 30 years ago.

And that’s when I was reminded that all the "music genome" propeller heads in the world can stream all they want, but they’ll never really “get it.”  They’ll never communicate the passion I have for my music.  They’ll never wear the shoes of those great jocks that live and breathe the music of a generation. 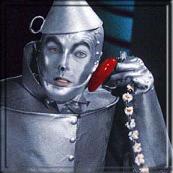 How can they?  Their exposure to “The Load Out / Stay” probably began and ended when they used their parents’ “Running On Empty” LP for a Frisbee.  They have no context to rely on and don't realize what a heartbreaking mistake they are making when they click and drag a nameless, faceless computer file across the screen and into a different file.

You can give a digital tin man a heart any day you want, but it will only render a digital “tick tock.”  It will never beat in time with the heart and soul of the music and the people who live and breathe it.

The fact that you didn't hear Stay had nothing to do with the lack of a heart in the digital world nor any lack of passion for Jackson Browne. As a board member of Pandora I should know. The company is governed by insane rules made up by the record labels to protect their interests. Thus, Stay is considered a second song by the same artist - and the DMCA (Digital Millenium Copyright Act) prohibits the playing of two songs in a row by a digital music service - otherwise you are viewed as a "track on demand" service - and thus subject to a whole bunch of additional fees. I agree that Pandora could do a better job with its playlists - particularly getting more variety into a playlist. I listen to great classic rock stations and what you get there - that you never get with Pandora - is great variety. You get from Jessica from the Allman Brothers to Ziggy Stardust from Bowie. That really gets to the heart of your comments - Pandora is solely music based, great radio is generational.

I wonder how Pandora treats Abbey Road or much of the Moody Blues catalog. Yipes!

Not to argue with the above comments by Mr. DeMott, but if Pandora follows the same DMCA rules as other streaming radio stations, there's no legal reason "Stay" could have not followed "The Load Out".

Great radio still takes the skill and passion of a great programmer who can hear it all in his head before it gets to air; with eyes focused on the program or Selector log.

Harry, I appreciate your comment and the insight about DMCA - it's something that most listeners wouldn't realize. And your comments about the difference between a service like Pandora and a terrestrial radio station - when it's fulfilling its mission - are well-taken. Thanks for writing, and providing us insight about Pandora.

Harry, I too appreciate the comment and insight. As a programmer, I don't mind telling you that if I was prohibited from letting the two songs track together, I'd take the first one out of the system so as to avoid the inevitable consumer backlash from what sounds to a listener like a lack of heart and passion from the people providing the music.

You're exactly right. Pandora is solely music based whereas great radio is often generational. While I remain very disheartened that Tim Westergren chose to e-mail his database and encourage Pandora users to contact their government representatives and convince them to enact performance taxes on terrestrial radio, my intention in this piece is only to point out the differences.

Have a great holiday.

Right, you are, Keith! VERY cool! I'm at 31,000 feet over Denver, heading to Cincinnati for Christmas. Seems we did the same sort of thing 19 short years ago driving down from T-Town to shoot The Beaver for Z-Rock. Ain't it funny how the time flies!

Thanks for all the replies to my comments.

Good comments regarding the DMCA. I believe Pandora has taken a pretty strict view of it - and really doesn't play 2 songs in a row by the same artist - although in this case I think you are correct that the songs should be linked - they are just never heard apart. (Or removed - although if you have a Jackson Browne station - you wouldn't want them removed - I assume they are a thumbs up song)

As to the e-mail campaign - remember it wasn't long ago that the CRB ruling threatened to put Pandora out of business - and enough passionate people out there helped flood Congress with pleas on behalf of the company and it was ultimately saved.

Now that being said, saving Pandora meant paying a pretty high royalty rate for songs - > 25% of revenue this year. Compare that to satellite at 8% or so - and terrestrial radio at 0% and you can see from a business standpoint where pandora might feel that it was entitled to a similar rate as radio.

In all fairness - all of the rates should be normalized at some common standard - and if it is 0% - all the better, but as long as some part of the musical food chain is paying, it is hard to argue that radio should be given a historical exemption. Yes, I agree that without radio (terrestrial or otherwise) record companies would have an extremely difficult time selling records - there is tremendous promotional value, but equally so - without the music, there would be no rock radio - or anything but Rush and Glen Beck. Those guys get paid for their content - is music any different?

Despite the enormous difficulties of the traditional radio business - it is still a business with 30+% cash flow margins and $16+B in revenue - so crying poor won't cut it. Where radio has had troubles - as evidenced by the recent bankruptcy of Citadel and Next Media - is simply in piling too much leverage onto these companies and then trying to cut costs (i.e. people) to try and make the balance sheet work - rather than simply accepting lower margins and giving the audience a better product.

Without 15 minutes of commercials per hour and centralized programming - satellite radio would never have taken off and Pandora would not be nearly as popular. But the truth of the matter is that radio shot itself in the foot reaching for higher and higher growth and is now 10 years later still paying for its errors - and sadly, despite the rise of satellite and the growth in Pandora - I see almost no radio company of any size or stripe doing anything even remotely innovative online - and it is a shame.