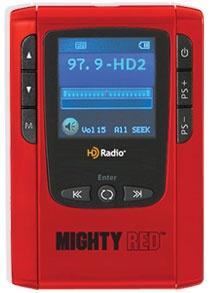 You have to give Radio Ink's Eric Rhoads a lot of credit.  If you missed it before the holiday, he is now "all in" for HD radio, on the strength of an inexpensive radio that he helped design in concert with iBiquity.

The essence of Eric's initiative is that among HD radio's many sand traps, a glaring problem is that many radio professionals have never experienced it.  Sure, a lot of people sampled it back during the early days when those original Boston Acoustic units made the rounds.

But a lot has happened since on both the technology and price fronts.  Yet, many of the thousands of folks employed in radio haven't really spent time with an HD radio.  How's that for a disconnect?  You can't exactly market or promote something effectively when you haven't really sampled it yourself.

So the "Mighty Red" radio is a $35 appetizer, designed to entice radio professionals and their companies to sample HD radio at a very low price.  Hey, if you buy one and end up hating it or thinking it's not that big a deal, at worst you're out the price of a nice dinner.

But if you like it, you'll tell others, it will be easier to market, and perhaps consumers will finally start getting the word from the radio stations they listen to every day that HD radio is a great entertainment deal in these cash-strapped times in which we live.

As Eric points out in his blog (below in its entirety), there have been many speed bumps during these past few years.  HD radio is challenged on many fronts - consumer awareness, availability of radios in vehicles, the challenge at retail, HD2 programming quality and commitment, and technical issues.

Like him, I have also struggled to make my own determination about whether this thing has a chance or whether it should be written off as a well-intended failure.  We have conducted our own research on HD radio, including a major project for iBiquity back in '08.  In every case, there have been positives, but also troubling signs involving the aforementioned challenges.

No one said it was going to be easy.  At roughly the same time, HD radio made its awkward debut, satellite radio and iPods were media darlings.  It isn't difficult to look at the game films and come up with a number of questionable calls and blown plays.

Back in the '60s, there was a saying:  "If you're not part of the solution, you're part of the problem."  I have thought about that phrase a great deal over the past couple years, because it is so easy to slip over to the dark side, and start throwing grenades at everyone you think is responsible for radio's problems.

But Eric notes that radio companies have converted nearly 2,000 stations to digital broadcasting, not to mention the increases in commitments from car manufacturers.  Radio has a fiduciary responsibility to its owners, its stockholders, and its partners to at least give HD radio an honest try. 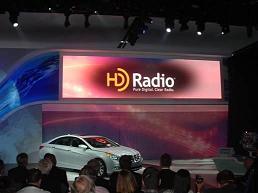 Our company has recently been retained by the Alliance to help set the best creative tone for HD radio advertising in 2010.  There's no Don Draper on my staff, but I am hopeful that armed with the tech surveys we've conducted during these past few years, combined with hundreds of Listener Advisory Boards and focus groups - coupled with the creativity of some of radio's best production talent - we should be able to make a contribution.

At least, I hope so.  I hear those voices of respondents in my head, as well as the many critics who have been very vocal (and at times, I have been one of them).

But I think that Eric makes some great points, and it's time for this industry to either get behind and support HD radio, or pay the price with a high-visibility failure.  I, for one, am tired of seeing radio get its ass kicked by critics, pundits, newspaper writers, and frustrated ex-employees.

We either figure out a better way to make this work or we look like jerks for not trying.

Your comments, brickbats, and suggestions are welcome.

"Struble began the session by citing the latest HD radio sales and broadcaster data. He noted that while sales of HD Radios are sharply increasing, especially with the new portable Best Buy Insignia and Zune HD models, the economy and declining station revenues have slowed adoption a bit on the broadcaster side. We’re selling millions, but we need to be selling in the tens of millions.”

"Insignia HD — I think this will be a nice little interim step for jogging or working out. It proves the viability [of the technology] and hopefully we'll get sales; but no, this is not going to sell in the hundreds of thousands... Radio alone — the sad reality of where it is — as a standalone device, it just doesn't exist anymore as a category. Nobody goes into Best Buy and says 'Where's the radio department?'"

The first article is what Bob Struble told the 2009 NAB Philly Show, and the second is what he told Radio World that same week.

In an email from Eric he claimed to have sold over 1,000 Mighty Reds, yet he won't be selling anymore after the second shipment. I'm guessing the majority of these were sold to HD broadcasters who were part of this miserable stunt. I've read comments about this on another popoular blog, and it seems all Eric accomplished was to tarnish his own reputation. Eric claimed to have sold out the first shipment, and the next shipment would conveniently be availble for Christmas, but for some reason these magically appeared. It's stunts like these that HD Radio has become famous for.

It is pretty obvious that no one will ever care about HD Radio. And, just like Ford that was supposedly adding HD Radio starting back in 2007, there are no reasons to believe any future announcements about HD Radio. According to posts on Radio-Info, iBiquity just had a massive layoff, as they are supposedly not returning phone calls to HD licensees.

What about the harmful interference to first-adjacent stations, Fred? WHAT DO YOU PROPOSE DOING ABOUT IT????

Fred Jacobs, you're a foolish man.

"But I think that Eric makes some great points, and it's time for this industry to either get behind and support HD radio, or pay the price with a high-visibility failure."

Come on, are you for real Fred? It is a colossal technical and commercial failure either way, better dump it before radio looks even more foolish than it already does.

Well, Fred, thank you for posting this. The other commenters are entitled to their opinions as are you and am I. But I do question the eagerness to disparage others in the process.

For me and my radio operation, the law of the land allows a doubling of the FM mask in use of IBOC. FM Stereo led to a less pristine but seemingly successful system - that was compatible with existing receivers. That it took FM almost 20 years after that to catch up to AM in audience reach is a fact.

HD Radio is, likewise, compatible with current FM receivers. It will not likely have 20 years to wait for success, but to not try to make it work or wish for it to fail as some of your posters seem to recommend is not a path I or my station are following.

I can't really speak to the problems of AM stations, since I have been out of that side of the business since 1993.

Best wishes and regards to all,

Well Scott from WDUQ. Comparing HD radio to FM is a really bad comparison and you should know that. But, then again, you're going to believe what you want to believe. FYI - FM never displaced any existing services like iBiquity digital is doing. Stations co-existed without interfering with other services as well. Station owners didn't have to pay Armstrong a licensing fee either. So - good luck with that HD radio "path" you're on.

"I can't really speak to the problems of AM stations, since I have been out of that side of the business since 1993."

Scott, you really must be out-of-touch with the radio business, as a whole; so, you are not aware of the nighttime medium-wave debacle that IBOC is causing? I agree with Bob, above, that analog FM never displaced other broadcasters, as IBOC was designed from the start to jam the smaller, adjacent-channel broadcasters on AM/FM. You see, HD Radio stations double their bandwidth, thus displacing the adjacent-channel programming with their own HD2s/HD3s, but I'm sure you are aware of that fact; as time goes on, the General Public is also becoming more aware, guaranteed.

I really enjoyed this great post and you are very talented and interesting. I really appreciate this excellent post.

Hi... I read your post and I want to say that it is very good and informative. I like it and I appreciate you for your effort.Thanks..