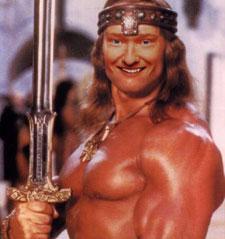 I don't know about you, but this very public debacle between Leno, Conan, (Jimmy Fallon is in there somewhere) and NBC is fascinating - not just to the public, but those of us on the management side who go through similar personnel moves and strategizing on a regular basis.

The surprise to me is just how out in the open it all is.  In most cases, management strives to have all the pieces in place before anything leaks to the public.  That's not always easy, because when you're dealing with multiple personalities in different slots, major league egos, agents, and the Internet, it takes a great deal of finesse to pull it all off.

The last word that comes to mind for this Conan situation is finesse.

Did NBC really think they could simply solve their prime time problem with Leno by simply floating their intention to the public - and hoping that Conan would simply OK the deal to move back to midnight?

And in another move that signifies how Conan may have won the sympathy of the American consumer - whether they have been enjoying The Tonight Show or not - here's a portion of his statement that explains why from both an artistic and from a business standpoint, moving his show later is just a bad idea:

So it has come to this: I cannot express in words how much I enjoy hosting this program and what an enormous personal disappointment it is for me to consider losing it.  My staff and I have worked unbelievably hard and we are very proud of our contribution to the legacy of The Tonight Show.  But I cannot participate in what I honestly believe is its destruction.  Some people will make the argument that with DVRs and the Internet a time slot doesn't matter.  But with the Tonight Show, I believe nothing could matter more.

There has been speculation about my going to another network but, to set the record straight, I currently have no other offer and honestly have no idea what happens next.  My hope is that NBC and I can resolve this quickly so that my staff, crew, and I can do a show we can be proud of, for a company that values our work.

So, among other things, talent has the upper hand in this mess.  And the company ends up looking dumb, shortsighted, and unwilling to give Conan enough time to establish his vision of The Tonight Show.  And Leno, after years of success, comes off looking like a failure.

Anybody who has managed or programmed radio stations for just a few years has run into similar dilemmas.  How much time do you give a show?  How can you coach talent in an effective manner to get a better result?  And in how many cases is the answer simply that it's going to take more time?

We aren't inside the NBC conference room, and I have been in enough of these situations to know that outsiders are often clueless about what really is being discussed and considered.  It usually comes down to whether the right decision is made about cutting bait, or whether the wrong call is made that simply fails to give talent enough of an opportunity to find its voice and, in the process, win over the audience.

This Conan situation has become very bush league, and now involves too many of the key stakeholders - the network, the talent, the affiliates, advertisers, the other media, the blogosphere and, of course, the audience.  The damage is widespread.

It also speaks to the power of the personality in determining futures.  In radio, it's a fine line.  In this economy, companies are coming back to talent looking for a cheaper deal.  And in more and more of these situations, jocks and teams are either deciding to walk (Dave, Shelley, & Chainsaw), are simply not being renewed (Jonathan Brandmeier, Steve Dahl), or are ending up re-energizing their careers on a new platform (Adam Carolla).

It is interesting that for industries that continue to emphasize the importance of "content" as personified by talent, there is an incredible amount of indecision and odd shifting around happening for everyone to see.

In the old days, companies could get away with these types of NBC moves, and consumers were reduced to letter writing campaigns, most of which went nowhere.

The Internet changed the game, and moved the discussion to the citizenry.  And as many radio general managers have seen over the past year, that tends to have a life of its own.

In Conan's case, his fans have their own dedicated Facebook page where they can support his efforts, bitch and moan, and organize their disdain for NBC. 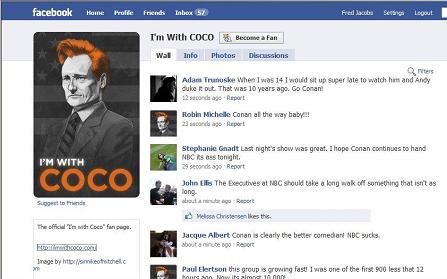 Despite its best efforts, this mess is cascading well beyond the control of NBC's moguls, and into the hands of the audience, advertisers, affiliates and all other quarters the company was hoping to avoid.  There are lessons here for any media outlet that depends on personality.

The Conan story is indeed a cautionary tale of how not to manage great talent in this new decade.