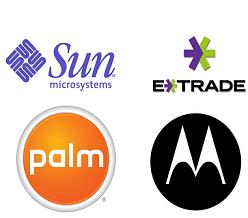 This recession and the aftermath of its reverberations have taken a toll on a lot of businesses.  But there's no greater impact than the total demise of a brand, especially one that's been around for all of our lives.

In 2009, brands like Pontiac, Gourmet, and Circuit City went under.  Recently, 24/7 Wall St. produced its watch list of brands that may not be around when we ring in 2011.

These include venerable companies that were late to figure out the changing tides of technology.  Kodak is on their list, along with Borders, Blockbuster and Newsweek.  All four missed the ways in which digital have changed the consumer landscape, especially when it comes to entertainment.  Brands like Netflix and Amazon have set a new standard in many of these areas by being innovative and staying in touch with customer needs and wants.

And then there are the casualties of the real estate bubble, such as Fannie Mae and Freddie Mac.  No surprise there.

But you may be stunned by some of the other brands that made their dead pool.  On the list is Sun Microsystems, E*Trade, Palm, and Motorola.  With the exception of Motorola, these are all newer brands that rode the wave of the first Internet revolution in the '90s.  They created great products and services that many of us owned or used.

24/7 Wall St. notes that while many of these companies are riddled with debt, and will likely be acquired or broken up, most failed to strategize their futures, and likely believed that the dark days of bankruptcy would never come.

That's the story of the digital age.  The envelope of success and failure has shortened, the stakes are higher, and the speed at which change takes place has exponentially accelerated.

Laurels don't mean squat in this tough environment.  Nor do loyalties.  The Starbucks maven who presented at last month's Arbitron Fly-In told us that even his best customers only buy coffee at his stores 29% of the time.

In a recent L.A.B. group I conducted for an Alternative station, the few people who actually claimed to be loyal listeners defined that as merely starting with the station when the radio is first turned on.  Even for a station that has won their loyalty, if they hear a bad song, a commercial, or anything else that is the least bit objectionable, the flipping begins.

Corporate teams who continue to focus on belt-tightening and debt reduction at the expense of customer satisfaction and strategic research do so at their own peril.  They may face the same fate that many of these aforementioned troubled brands will experience in 2010.

Radio brands have no entitlement to exist.  Nor do the companies that own them.  Strategy is everything.  Survival is earned.

Reporting on today's change in management at WLS-AM & FM in Chicago Robert Feder has a quote from the new VP/GM Michael Damsky that is very interesting. He says “Now it’s time to translate our sales success into great ratings stability

If that comment sums up radio's attitude at the moment then the medium should be put on the soon to be extinct list.