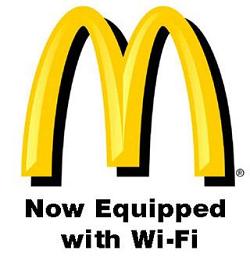 If you talk to anyone who travels for a living, access to hi-speed Internet is one of the most important - and often frustrating - aspects of the on-the-road experience.

And the crazy part is that the most expensive hotels - Ritz-Carlton, Four Seasons, and the like - universally charge for Internet access.  In some cases (with tax), it can approach $15 bucks a day.  Now you'd think that a hotelier focused on the customer experience - especially the business traveler who supports the business in good times and bad - would learn from researching customers.

But the reality is that because hotels have stopped making money from exorbitant telephone charges, thanks to cell phones, they feel compelled to stick it to you with their Internet charges.

On the other hand, if you stay at Hampton Inn, Courtyard by Marriott, Candlewood Suites, or other low-cost brands, Internet is almost always free of charge.

Free Internet is also something that has worked for Panera Bread, especially over Starbucks (which has historically made Internet access difficult and expensive).

But the big announcement is that McDonald's will now provide absolutely free, unlimited Internet access in the vast majority of their stores starting in January in a partnership with AT&T.  Up until now, they've charged $2.95 for two hours.

McDonald's CIO told The Wall Street Journal that "This is about making this open and convenient.  Free is free."

It sounds like a direct challenge to Starbucks - first with coffee, and now with the Internet.  McDonald's is serving notice that it will be aggressive and competitive.

And for radio, this should be yet another indication that free web access is coming virtually everywhere.  The McDonald's decision will strongly resonate in boardrooms all over America, as retailers try to generate store traffic, and keep customers happy.

It also means that anyone with a laptop or netbook (or smartphone, of course) now has a "radio" that can be played in more and more places.  Your stream becomes an even more important part of your platform, which means that as this year comes to an end, every broadcaster should take a good hard listen to their streaming product

For so long now, streams have been afterthoughts at many stations - an obligation rather than an opportunity.  As stations have struggled to monetize them and budgets have tightened, many operators simply don't pay much attention to the platform (until they go down and a listener bothers to call).

In 2010, your stream becomes a bona fide second transmitter - allowing you to reach an audience beyond your terrestrial tower.

Your's station's brand equity as a brick and mortar media outlet in a mass medium gives you leverage over Rhapsody, Shoutcast, and even Pandora.  Use that edge now to prevent your station from becoming an also-ran in the online world.

Because certain phones may or may not integrate FM radio in the future is short-sighted, and will still limit you to individual devices while restricting you to the signal contours of your antenna.

As the media world changes, moves solidly into digital platforms, and becomes second nature to so many consumers, terrestrial broadcasters need to wake up to these rapidly growing options.  A strong streaming platform gives terrestrial radio a stronger in-office, at-home, mobile, fringe, and global reach.

Not to mention fast food restaurants.

Mickey D's has moved the cheese.