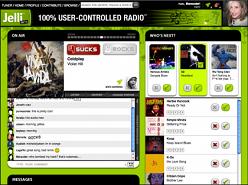 For decades - essentially all of our radio lives - music stations have been programmed the exact same way.  Record labels delivered their pet projects, while their promotion arms (as well as indies) marketed the best financed bands and songs to PDs and music directors.  The end result, of course, has been predictable radio.  While successful, we have heard countless stories in listener focus groups about how consumers perceive that stations only play what is being promoted by the music industry.

Through this time, radio has had no motivation to change its ways because the model worked.  Sure, listeners had some input.  Occasionally, DJs answered the "request lines."  And of course, AMTs provided samples of listeners with the opportunity to give a thumbs-up or down to hundreds of songs.

But the Internet Age has ushered in a new sensibility about how music and radio should sound, and the emphasis is on the consumer.  Clinging to its familiar system, radio has essentially resisted the change.  (Think about the way the labels failed to recognize iTunes and other Internet music sources of music discovery.)

But today, something interesting is happening.  Jelli started as an Internet "radio station" and is now making its way to terrestrial stations, starting with Live 105.  And as of this week, the San Francisco Alternative station is going with Jelli as their primary programming every weeknight.  Dial Global is serving as syndicator, and we at Jacobs Media are pleased to be working on helping to shape the Rock/Alternative version of Jelli.

It's a reminder that broadcast and Internet radio do not have to co-exist as mutually exclusive entities, but can forge partnerships that have the potential to work for both sides.  Too often, established industries fail to see synergies with emerging businesses, and thus become pigeon-holed as "old media."

Instead of chasing listeners away to services like Pandora, terrestrial radio might be better served by considering ways in which to integrate some of the features offered by Internet radio that could enhance the overall listening experience.  That might mean offering more streams that provide more variety, be they online or HD radio.  Or by forming alliances that meld various entertainment options in new and different sponsorable packages.

That's what the Jelli experiment is about, and we're excited to be a part of it.  At a time when there is so little buzz about radio, creating word-of-mouth by reinvigorating the traditional model can be a good thing.  There's no doubt that new and exciting channels like Jelli can benefit from the experience of seasoned radio pros.  But by the same token, grizzled radio veterans can become more attuned to changing tastes and platforms by looking past the tired paradigms and rethinking the consumer experience.

New doors are opening right before our eyes.  Many broadcasters should consider stepping inside.