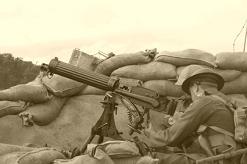 It is a basic rule in military strategy that cautions against fighting wars on two fronts.  Of course in history, it has been done, but it is indeed a difficult task especially in a climate of diminishing resources.

When we advise client stations that are surrounded by music competitors on both sides, our response is to try to pick one battle that is winnable.

That is why the current dilemma facing radio programmers, managers, and owners is so challenging.  And I'm not talking about the difficulty of programming two stations while also having an airshift, or overseeing an entire cluster.

The challenge at hand goes well beyond the familiar day-to-day "radio wars" in which we've all been well-trained.  The tough nut about today's environment is that so many managers are often oblivious to the larger war they're fighting - and yet rarely acknowledging.

I was sitting at Arbitron's "Programmer Fly-In" last month, observing the well-attended conference's rabid attention on PPM.  As this new methodology is rolled out in more and more markets, interest in figuring out "How to win in PPM" has never been higher.

Here were 200 attendees, intensely focused on gaming PPM, determining how to best construct clocks and stopset strategies that might beat the system, and gain an edge on the station down the dial.  For decades in radio, that's been the mission - beat the other guy.

Most programmers have been schooled in these hand-to-hand tactics, made famous by brilliant tacticians like Randy Michaels, Scott Shannon, and others who looked for every angle that would drive the competition crazy - and out of format.

But while so many in radio are focused on these time-honored traditional battles, a larger war has been raging for more than a decade, and it has nothing to do with call letters or clocks.  In fact, like rust, it is insidious and easy to ignore, as it steadily erodes radio's once dominant position in the media hierarchy.

Today's PDs - and more importantly, the captains of the radio industry - are saddled with a two-pronged threat: the station-to-station battles as well the new media competition.  The latter is a far greater threat to the industry's welfare.

Yes, it's still critical to achieve the highest possible target demo rank in Arbitron.  For the purposes of revenue maximization, especially following radio's worst year ever, ranking as high as possible to accrue the largest share of declining dollars is still an important goal.

But the other front is all about the revenue erosion in radio, accelerated by the leakage of consumers to other entertainment and information options.  It is no longer just a matter of what comes out of the speakers in your hometown.  The larger struggle is maintaining radio's importance in the array of media choices, keeping content relevant, and engaging a very fickle consumer base.

That second front is about your digital presence, your community engagement, your audience networking, your personality lineup, and integrating consumers into your brand in ways that generate loyalty and word-of-mouth.

That's a lot more difficult than tactically moving stopsets, strategically burning out the competitor's gold library, and nest marketing efforts that may stimulate people to tune in at work.

But it is more comforting to continue to wage the easy, familiar and convenient war - the one in which we've been trained, and many of us have experienced success, in some cases, for decades.

If bumperstickers were still in vogue, we would not be seeing very many for The Eagle, Z98, or The Fan.  It would be far more common to spot stickers with messages like "I ♥ my iPod" or "Got Pandora?" or "What's your favorite app?"

Radio's battleground has changed, and as companies regain their financial footing this year, either through economic recovery, planned bankruptcy, or whatever is necessary to remain solvent, focusing on "the other war" isn't just a good idea.

It's the only idea.