It is interesting how some of the most prescient observations about society and culture over the decades have come from sci-fi writers and cartoonists.  If you read the graphic novel, Watchman, (much better than the film), you know what I'm talking about.

"Betty" by Delainey and Rasmussen often comments on tech and its impact on our lives.  And this strip says so much about how consumers are using gadgetry shortcuts to enjoy the content they crave. 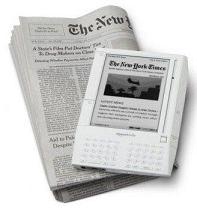 In the same way that TiVos and DVRs have expedited our ability to enjoy television programs (sans commercials) at our convenience, the Kindle and now perhaps the iPad are changing the way that consumers read books, newspapers and magazines.

As the comic strip reminds us, that doesn't do Borders much good at this point.  They've allowed their best customers to virtually leave the store and buy Kindle books less expensively at Amazon.com (and they even provide the Internet connection to speed up the process).

The record labels made the same mistake - twice.  First, with Napster and then with iTunes.  In both cases, their insistence to sell entire albums on CDs at record stores on their own terms cut them out of the commerce process.

Television is trying.  As YouTube has exploded, they recognized the streaming video threat, and opportunity.  Thus, Hulu was created.  By expanding their distribution points to on-demand web sites, TV stands a better chance of controlling, managing, and monetizing their content, even as they blow up their rigid schedules and allow viewers to set their own rules.

Of course, it's a risk.  But they realize that the Internet has changed the distribution and delivery game, and the way that Americans consume entertainment and information.

Which, of course, brings us to radio.

Will we stay married to our transmitters and our towers?  Will we continue to reluctantly expand our distribution platforms, not as afterthoughts or because we're forced to?  But because we understand that consumers are changing and moving and we have to change and move with them.

Radio has come around to using some of the new tools - Facebook, Twitter, mobile applications, texting - but are we providing locations outside of our terrestrial coverage that will ultimately circumvent radio listening?  Or are we using new platforms to speak to our customers in the places where they are comfortable, while encouraging them to come back to our home base?  Are we engaging them, facilitating the conversation, and allowing them to participate in the programming? 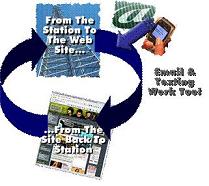 Tim Davis of our company coined the term "pinballing" a few years ago.  It's the way in which we move listeners from one platform to another, with more listening and engagement being the goal.

I was reminded of this a week or so ago when WRIF's Drew & Mike launched a simple online poll question about the Michigan budget - and attracted 26,000 web votes.  And of course, the payoff - the conversation - recycled back to the morning show - whether you were listening terrestrially, or via their stream on a computer or an iPhone/BlackBerry.  Only a monster morning show could pull off this level of engagement and interest.

But in both curious and disturbing ways, radio is letting its talent get away.  Adam Carolla is now heard only on podcasts.  Lex & Terry aren't in Dallas anymore.  Dave, Shelly, & Chainsaw, Jonathan Brandmeier, Steve Dahl and others are simply nowhere despite being legendary names that consumers enjoy.  And it's not just PPM.  It's because traditional radio revenue platforms no longer support their hefty salaries.

Audience demand is there.  It's just that consumers are increasingly becoming platform agnostic.  Or better put, they use new gadgets and technologies.  We either show up where they are or risk being left out - just as Borders and Barnes & Noble are sadly learning.

As Carolla has proved, the podcast platform suits him well as his fans can grab his bits at their convenience.  Radio ownership needs to do more than give lip service to new delivery systems.  There's a need to embrace on-demand content (a better term than podcasting) and figure out how to monetize it - not how to bonus it or treat it as so-called "added value." How can radio companies put together partnerships with talent that allow each side to reach more consumers on new platforms, thus creating more avails in more places?  As advertisers move their dollars to the web, social networking, and mobile, how can a business that insists on selling :30s and :60s over the air hope to remain relevant, much less solvent?

If the content's not there, no one cares.  But if your station or your show is producing memorable, interesting, and compelling radio, how it's delivered to your customers in a way that ensures maximum crediting in both Arbitron and in dollars is your concern, too.

As Deep Throat told us, "Follow the money."  It starts with following the audience.