The Internet is famous for stumbling upon something interesting while you're looking for a completely different thing.

That happened to Ralph during a recent search at Facebook.  He ran across 900,000 pissed off radio listeners.

What are they angry about?

It's simple.  They're outraged about stations that don't identify artists and titles of the songs they play: 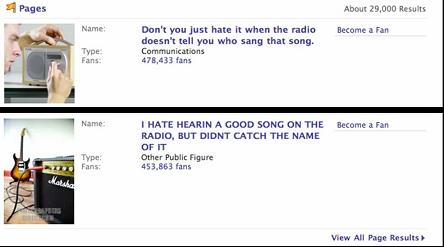 Now if you've conducted research in the past 20 years, you know all about this desire for song/artist identification.  But groups of hundreds of thousands of Internet users?

Back in the day when you'd get a letter or two a week from disgruntled listeners, it wasn't always easy to know precisely how many people shared their ire.

And maybe there weren't enough complainers to care.

Today with social networking tools, we not only know the numbers, we can dig right into the intensity of the emotion.  Most radio stations aren't as in-touch with their listening communities as they might think.  In fact, you could argue that there are larger and more cohesive communities inhabiting sites like Facebook that are organized, united, and more than a little frustrated with the radio they hear.

Tapping into those emotions and becoming a part of the conversation is all part of the changing dynamic of the relationship between stations and the listeners they are trying to reach.  Early next month, I'll be speaking at the Michigan Association of Broadcasters' Great Lakes Broadcasting Conference & Expo with Alison Circle, head of marketing communications and brand management for the Columbus Public Library.  In previous lives, she was national marketing director for Garrison Keillor's "Prairie Home Companion," and was an account director for an agency that handled branding chores for Target. 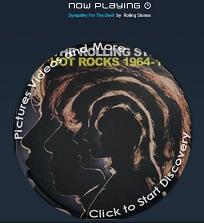 The concept of the presentation is to identify opportunities to connect with the audience via social networking avenues, and identify some best practices that are effective.  In many ways, consumers are more advanced in their efforts to organize communities, and get their messages heard.

Opening up better lines of communication with the target isn't just smart - it's essential in order to navigate these rapidly changing waters.  The days of just serving it up and expecting them to just take it are rapidly coming to an end.  Integrating their ideas and feedback is all part of how stations can participate in the process with the help and enthusiasm of consumers.

Just ask one of those 900,000 disgruntled radio listeners who just want someone to listen to them.

P.S.  Whether you think it's a dumb fan page or not, consider that it's been up for less than 90 days.

This is one of the most important messages you've posted on this site as far as I'm concerned.

I think PDs are apprehensive to ID every song over two things in particular: 1) fear that P1s could consider it annoying after a while and 2) not knowing how to seamlessly mesh song IDs into the station's image without messing with their perceptions of clutter.

However, if the audience doesn't see it as clutter, then clearly there is no reason not to ID every song. After all, even slick production can't save a station if it fails to fulfill the audience's expectations.