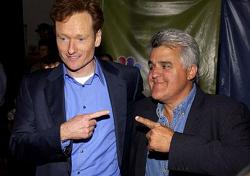 As we discussed in a blog post a couple of weeks ago, say whatever you want about the Leno/Conan debacle, but the fact that NBC let all this get so public may go down as their biggest mistake.

Bad programming decisions are made all the time.  We've all made them.  But it is how you unwind a lousy call that often tells the story.  And in this case, NBC only made matters worse by pissing everyone off along the way.

Now that supposition has been born out by a recent survey among advertisers that lays the blame for this mess squarely on NBC's doorstep.  Yup, it's one thing to annoy the public and alienate big-name talent, but another thing entirely when you start inflaming the folks who put money in your coffers.

According to the 129 advertising and marketing execs that took part in this Round2 Communications study, 5% lay the blame on Leno, 1% say it's Conan's fault, and a pretty definitive 94% point right at NBC as the ones who screwed this thing up.

Isn't that the way it always seems to work when talent is involved?  In almost every case, management gets pigeon-holed as evil, while Leno and Conan become the victims.  Even a corporation the size of NBC with all its PR resources and clout couldn't get out of the way of its own mess.  And the public always enjoys watching a slow-motion train wreck.

And the big takeaway from the media mavens in this study is that because NBC totally botched this situation, which of course leads right to their perception that this debacle will hurt the company's late night revenue.

So all in all, a total disaster - not because NBC made the wrong call.  But because they did not contain the situation, failed to build bridges with talent to solve a sticky problem, and then let the media - and the public via social networking - gain control of the story.

As we suggested last month, there are lessons here for every broadcaster trying to make the right calls while trying to keep advertisers and listeners happy.  This NBC mess is more than just a cautionary tale.  It is a classic business school course about how to mismanage talent, screw the audience, turn off advertisers, and in the end, screw up their brand.