Recently, Bill Gates surprised a lot of the web 2.0 elite by re-establishing a Facebook fan page, and joining the Twitterati.  The coverage has revolved around Gates finally learning how to use these basic fundamental social networking tools that teens and the Internet's leading edgers have used for years.

Based on his posts and his Tweets, however, I would suggest that Gates could teach many of them a lesson about how to effectively use social networking sites to communicate his thinking.  He has a new Gates Notes website, and recently tweeted that he's "excited to share more about what I'm learning." 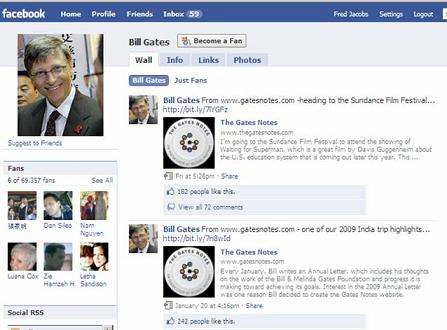 Many of the so-called media pundits could learn about brevity, content, and when to take your shots from Gates.  He may be new at this, but already, his postings are constructive, thoughtful, and sincere.  When you read his messages, you're receiving ideas from a true thought leader - not someone who is mindlessly trying to accumulate as many "friends" or "followers" as possible.  He uses these tools with a sense of modesty and grace.

As readers of this blog know, I have struggled with both Facebook and Twitter.  While I am back and involved in both services, I continue to question whether my thoughts and observations are worthy.  It's one thing to write a blog post in this space each day.  It's another to share more transient ideas and quips on Facebook, much less the hit and run Tweets on Twitter.

Both services have incredible value and power as we have learned over the past couple of years, but they also have the ability to expose their users as egomaniacal, trivial, and with apparently too much time on their hands.  In five days, Gates has sent out 15 Tweets.  Many of the people that I "follow" crank out that many in a day, providing me with their important insights on everything from what's in their email box this morning to their exercise routine. 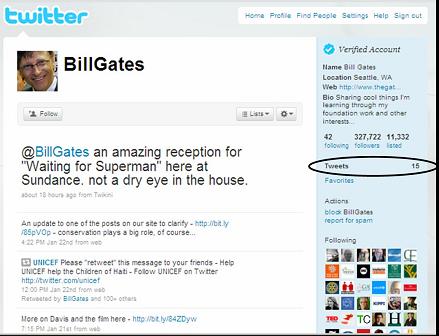 Look, not everyone can be Seth Godin.  (Interesting, isn't it, that he is presently inactive on Twitter?)  We're just not all that clever, insightful, or pithy.  Unfortunately, on Facebook, Twitter, and similar digital venues, there are simply too many wannabes trying to make the cut, and diminishing their intelligence and perhaps even their reputations in the process.

As one of my mentors counseled me early on in my career, "Leave them wanting more."  That sure runs against the grain of social networking sites and services, where there are no limits or costs to being verbose, repetitive, or irrelevant.

No one gives a shit what film I saw this weekend, my instantaneous impression of that new Starbucks blend, or which airport I happen to be running through.  (And if that kind of stuff interests you, that may say more about you than me.)

I have opted to be judicious by limiting my posts so as not to waste anyone's time, if for whatever the reason, you're following me or have "friended" me.  If I go somewhere of interest, I'll send out a Tweet.  If I learn something that I can pass along to you, I'll tell you "what's on my mind" on Facebook.  Otherwise, I will STFU.

I have more respect for Bill Gates today because I am watching him use these tools for the greater good.  In the process, he will enhance his image in the world community and help people along the way.  Isn't that what Facebook and Twitter are all about?

And sorry it took more than 140 characters to communicate these thoughts.

good one fred! i like what you write. i'll have to remember to come here more often!